Red Dead Wiki
Register
Don't have an account?
Sign In
Advertisement
in: Characters in Redemption 2, Characters in Online, Antagonists
English

Bartholomew was born into the wealthy Braithwaite family to the family's matriarch, Catherine Braithwaite, and an unidentified father.

A Life of 'Shine

After the protagonist starts a moonshine business alongside Maggie Fike, Bartholomew becomes a rival bootlegger to Maggie's revived operation. Following Maggie's disappearance six years prior, the Braithwaites took over the moonshine trade in Lemoyne, and recruited Maggie's former cook, Danny-Lee Caton, who was looking for protection, to oversee their production.

After the protagonist sabotages one of their operations on Maggie's behalf, Bartholomew and Danny-Lee confront them at their shack shortly afterwards in an attempt to intimidate them, but their threats are waved off by Maggie.

Later, Maggie arranges a meeting with Bartholomew and Danny-Lee under the guise of making amends by providing a shipment of moonshine, and anonymously tips off Reid Hixon. When Bartholomew and Danny-Lee arrive at the meeting place to find no one, they are quickly held at gunpoint by Hixon's recently-arrived revenue agents. Bartholomew tries to save himself by betraying Danny-Lee and telling Hixon that he can arrest him. When this fails, he tries to intimidate Hixon by telling him that he has hired gunmen nearby, and that only he can call them off. In the end, after giving Hixon a $100 bribe, Bartholomew is allowed to escape.

Bartholomew is first seen in the game alongside his mother, Catherine, and his brothers, Gerald and Gareth, when Arthur Morgan and Hosea Matthews arrive at Braithwaite Manor with stolen moonshine. When Hosea suggests selling the moonshine somewhere else, Bartholomew threatens Arthur and Hosea, pointing his shotgun at them and threatening them to hand over the moonshine. However, Catherine lowers his gun and asks him to pay Hosea, in return for also giving out the moonshine for free at the saloon in Rhodes.

Later, Bartholomew is seen meeting at the manor with Hosea, Sean, and later Arthur, alongside his mother. Bartholomew stays relatively silent during the discussion, except while insulting Hosea, while Catherine commissions the trio with burning down the Gray family's tobacco fields.

After the Braithwaite family's kidnapping of Jack Marston in retaliation for the Van der Linde gang having interfered in their feud with Grays, Bartholomew is present when the gang approaches the manor. After a brief exchange of words, Dutch abruptly shoots him in the head, killing him and resulting in the subsequent shootout at the manor.

Bartholomew pointing his shotgun at Hosea but his mother intervenes 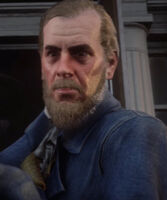 Bartholomew paying Hosea and Arthur for the stolen moonshine

Bartholomew with Catherine in "The Fine Joys of Tobacco" 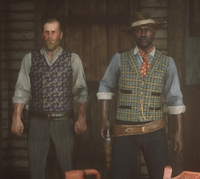 Braithwaite and Danny-Lee Caton in the Moonshine Shack 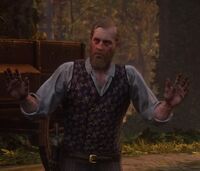