Wreck of the Serendipity

“Why? I did what you asked. I got you Williamson and Escuella. It's over. Stop playing games with me!”

Bear One Another's Burdens is the forty-second mission in Red Dead Redemption.

John Marston has arrived in Blackwater and meets up with Edgar Ross and Archer Fordham. Marston believes he has finished his job for the bureau, but finds out that they want him to take out Dutch van der Linde for them as well. The bureau will continue to "care" for Marston's wife and son until he does so.

The agents have a possible location for Dutch. They believe he's held up with some other renegades in the Wreck of the Serendipity. During the cut scene, Marston obtains the High Power Pistol from Ross.

You can decide whether you want to skip to destination or wait for the car to arrive at the shipwreck. Upon arrival, Marston is ordered, together with Fordham, to search the area.

Upon entering the dock area, Mr. Fordham will point out that this spot is far more abandoned than it usually is. The feeling of a set-up is obvious, but follow the agent across the docks until he orders John into the ship to follow the shouts of what sounds like a teenage boy. Upon ascending two staircases, Marston will find the boy tied up with a bag over his head. John calls out to Fordham, who runs to John quickly. After looking at the victim, Mr. Fordham points out that the boy is Nastas, the informant who gave the supposed location of Dutch. Suddenly the two men are surrounded by Dutch's Gang. Fordham orders Marston to carry Nastas due to him being badly beaten, so from here John must carry Nastas back to Agent Ross and the automobile. Due to carrying Nastas, Marston only has one hand with which to shoot, so Dead-Eye will be his best friend at this point.

Keep in mind, Nastas has a health gauge when carrying him. Also, shooting the majority of Dutch's Gang from the top of the ship might be easier than fighting them on the ground.

After having blasted through the waves of gang members, jog up the to the automobile and put Nastas in the backseat. Everyone will get in the car for a clean getaway. After driving for about 45 seconds, the engine overheats and needs to be cranked. More gang members arrive on horseback, so John and Ross fend off the thugs while Fordham cranks the car up. After awhile, the car is fixed. Keep in mind that if the gang members reach the car, the player fails the mission. Everyone proceeds on to Blackwater to get Nastas to a doctor.

Upon arriving in Blackwater, the agents will take Nastas to Professor MacDougal and tell Marston to help him study the "native problem" in the country.

Marston carries Nastas away from the Wreck of the Serendipity.

The automobile
Add a photo to this gallery 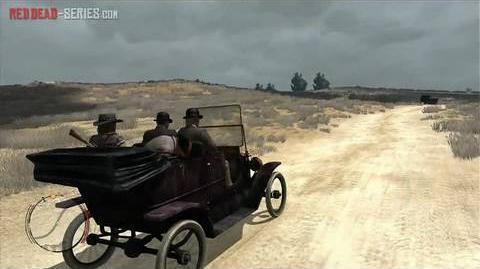 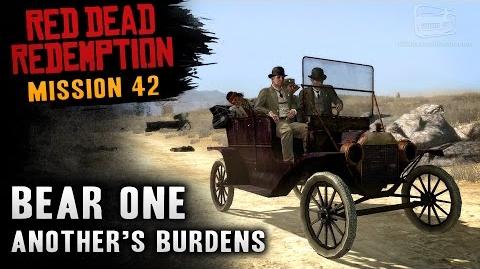 Retrieved from "https://reddead.fandom.com/wiki/Bear_One_Another%27s_Burdens?oldid=405690"
Community content is available under CC-BY-SA unless otherwise noted.