View source
watch 00:52
What are Beavers?
Do you like this video?
Play Sound

Beaver is an animal species found in Red Dead Redemption.

They are a large rodent species found in areas of the American West. These animals are known for their ability to build large dams, flooding waterways and creating ponds. They are highly sought-after for their pelts.

Beavers are only found in West Elizabeth. The following list details some specific locations within that region where beavers are most common:

In the Stranger Side-mission "Deadalus and Son", players must collect 5 beaver furs for Charles Kinnear. Beavers are only found in West Elizabeth, which may not be accessible if the player has not yet proceeded far enough in the story to unlock that area. 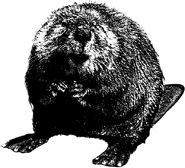 The player must kill a beaver to contribute toward acquisition of the following trophy/achievement: