Dakota River in The Heartlands, State of New Hanover

Benedict Allbright is a quack Snake Oil conman who sells his counterfeit cures to the people of New Hanover. However, his "miracle cure" supposedly contains harmful substances, which have caused numerous fatalities. Because of this, a $50 reward was offered for his capture; his bounty poster can be picked up in Valentine sheriff's office.

Uncle had mentioned to Arthur that there was a bounty available in Valentine and that it might be profitable. Arthur is introduced to Allbright by Sheriff Malloy, who offers a $50 reward if he is captured alive, beginning the optional mission "Good, Honest, Snake Oil".

Allbright is found by a campfire on a small cliff, by the bank of the Dakota River at the Cumberland Falls. Arthur confronts him, causing Allbright to not reveal his identity. As a trick, Arthur tells him that his mother is sick and that he wants to buy his miracle cure to save her. Seeing an opportunity, Allbright relaxes and happily bargains with Arthur. Arthur then holds Allbright at gunpoint, demanding him to surrender in the name of the law.

Allbright claims that he is innocent and jumps over the cliff into the Dakota River, and gets swept away in the current. Arthur pursues Allbright further down the river and ultimately manages to capture him. Once Allbright is returned to the sheriff's office in Valentine, the player receives the promised $50 reward, and Allbright is locked up for good; he can still be seen in the jail by 1907, eight-years later. 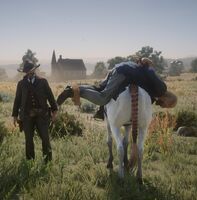 Exploring Great Plains as Arthur, thanks to Allbright being stowed on horseback