–Bert Venter in a fistfight

Judging by his surname, and the fact that he is frequently found there, he is likely the owner of Venter's Place, one of the many ranches in New Austin.

Bert plays a minor role in the mission "You Shall Not Give False Testimony, Except for Profit", in which he is among the crowd that gathers around Nigel West Dickens. Eventually, he is convinced and purchases some of West Dickens' miracle tonic.

Bert can commonly be found in and around Venter's Place.

Bert can also be found in the "In Need of a Ride" random encounter, where he will ask for a ride and then will attempt to steal your horse. 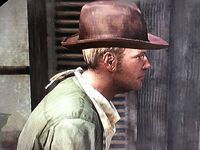