Bighorn Sheep are large, wild sheep, which can be hunted. Be aware that shooting an animal near the Bighorns will cause them to become spooked. These animals are preyed on mainly by bears and cougars and on rare occasions they may come across wolves. When the player sees the corpse of these animals, note that the predator is probably still close to its victim.

When killing an animal, it usually attracts a predator. For example, killing a bighorn in Tall Trees will quite likely attract a group of bears.

The player must skin five Bighorns as part of the seventh level of the Master Hunter Challenges.

They can be found in the following areas: 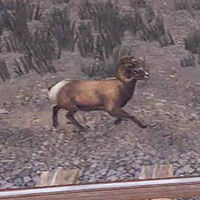 The player must kill a Bighorn Sheep to successfully complete the following achievement: