Wilhelm Schnell, also known as Billy Midnight, is a minor character featured in Red Dead Redemption 2. He appears in the Stranger mission "The Noblest of Men, and a Woman".

Billy Midnight was an infamous gunslinger roaming the Wild West. He became an overnight sensation after killing another gunslinger, Rabbit Matthews, which made Billy later become a national celebrity. He later did speaking tours and re-enactments in Saint Louis, San Francisco, and Saint Denis, among other places. Due to his notoriety, he has received death threats and even assassination attempts.

The player is sent to track down Billy, and potentially interview him. The train clerk tells the player that Billy is often drinking in the bar carriage, so the player searches the train and finds him in the train's bar room. When the player approaches Midnight and asks him about his gunslinging days, Billy gets skittish and denies killing Matthews in his sleep, believing that the player has been sent to kill him. The player chases him through the train and eventually onto the roof. Cornered, Billy then challenges the player to a duel, in which he is killed, and a picture is taken of his corpse. His personal weapon, Midnight's Pistol, can be obtained after his defeat.

Later on, the player gives Theodore Levin the picture of Billy Midnight's corpse. Levin uses it as part of his book about the gunslinger Jim "Boy" Calloway, in which he writes that it was Calloway who was responsible for slaying Midnight.

Midnight has a unique strategy where he kneels down on one knee as he draws his pistol, to make himself a smaller target. Therefore, the best way for the player to make their shot hit is by ignoring the head and aiming for the torso instead. Regardless of where he is hit, Midnight will die from a single shot.

Since the player's Honor cannot change in duels which are part of the mission "The Noblest of Men, and a Woman", the easiest way to beat Midnight is by cheating: the player should only partially charge the draw meter, to make sure they do not miss, before shooting. Otherwise, they should immediately activate Dead Eye, manually adjust the aim, and then shoot.

Alternatively, the player can also choose to disarm him. To do so, they should fully charge the draw meter and shoot Midnight's hand as soon as he reaches for his pistol. After being disarmed, Midnight will laugh maniacally and pull out a Cattleman Revolver, before committing suicide. The player cannot stop this, as hitting him anywhere will kill him. 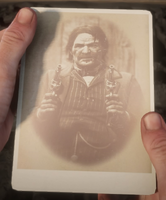 The photograph given to the player by Theodore Levin

Midnight in the bar wagon

Billy at the bar 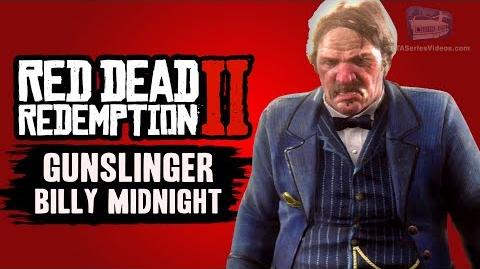