She is one of the subjects of the Redemption 2 stranger mission "The Noblest of Men, and a Woman".

Following her first robbery in Rhodes, Black Belle became an infamous member of the Colter Tobin Gang, of which she is the sole surviving member. It is known that she was married six times to six gentlemen, although she has never divorced any of them. Her deeds eventually resulted in her becoming a renowned gunslinger.

The protagonist can encounter Black Belle at Old Harry Fen. She will be initially hostile towards them and light a stick of dynamite, before deducing that they are not a bounty hunter, but rather an escapee from Sisika Penitentiary, and that they are looking for work. She will tear off the detonation cord and use it to light a lantern, before informing the protagonist of some bounty hunters that captured her boys, who are going to be hanged in Rhodes. She then enlists the protagonist to rescue the men in question from the authorithies, promising to pay them on their return.

Following this, Black Belle can be found again at Old Harry Fen, and will offer more jail breakouts, wagon thefts, paid killings, supplies destructions, and coach holdup missions to the player. Accepting her missions will decrease the player's honor.

With this, Black Belle keeps her promise and gives the player information on Jim "Boy" Calloway. She says that he was a coward who usually ran from a fight, and refers to him as "Little Boy Calloway". She also says that a genuine gunslinger would not spend time reporting stories of their exploits to newspapers, suggesting that tales of Calloway's gunslinging had been fabricated. The protagonist thanks Black Belle for the information and asks for a photograph of her. Black Belle poses for the player with her rifle, and her picture is taken. With all of this done, the player wishes Black Belle good luck as she mounts her horse, and she winks at the protagonist before riding away. She is not seen or encountered again.

A photo of Black Belle, provided by Theodore Levin 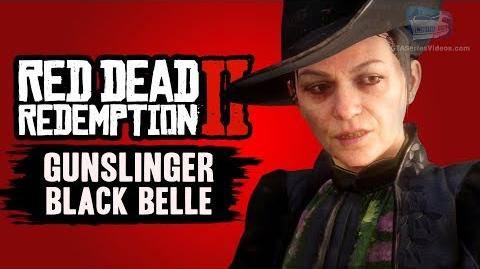