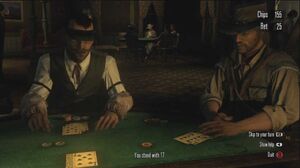 Blackjack is a type of card game, and is traditionally associated with betting and gambling. It is also known colloquially as Twenty-One. In North America during the early twentieth-century time period that Red Dead Redemption is set in, blackjack is a serious parlor game that can sometimes result in violent disputes and death.

Marston can participate in games of blackjack throughout the game world and either win or lose considerable sums of cash. Saloons feature blackjack tables very prominently.

Marston is required to wager on these games, and can not cheat at this game with use of the Elegant Suit.

There are four locations where the player can engage in Blackjack: Thieves' Landing, Blackwater, Rathskeller Fork, and Chuparosa.

Keep in mind that to "win" at Blackjack for the 100% trophy, you simply need to leave the table with more chips than you began with. Even winning just one chip more than what you started with counts.

Blackjack can also be won by having "Five Card Charlie" when you have a total of five cards of any value without busting.

All games require a 'buy-in' payment to buy your initial chips before you can play.

If winning three times the 'buy-in' amount, the player automatically leaves the table and drops a catchphrase like "I will leave while the winning is good."

Players are initially dealt two cards by the dealer, who also is dealt a hand. Traditionally, one of these two cards is placed face down on the table to obscure the value to other players, only the individual who holds the hand knows the true value. Players will play their hands against the dealer, and not each other. Players will then take turns choose to either "hit" (take a new card from the dealer) or "stand". If a player hits and exceeds 21, they are said to have "busted", and lose their wager to the dealer and must wait until the next game. A player "stands" or "holds" when they decide they hold a better hand than the dealer, and do not wish to risk a bust.

All cards are revealed when all players and the dealer have chosen to hold, or have busted. Players with a hand closer to 21 than the hand of the dealer win the wager. Dealers traditionally play systematically and will hit unless their cards equal a value of 17, at which time they are obligated to hold.

As with real life Blackjack there are some simple guidelines for winning:

Double Down - Doubles your bet, but you only get one card

Split - Makes 2 hands out of one, with the split cards being the first card of each hand

It is not possible to count cards effectively in Redemption, since the game engine deals every hand from a fresh 52-card deck.

It is also possible to bet a second time for an insurance, although this is rare.

Playing all of the gambling games, including Blackjack contributes toward acquisition of the following Achievement/Trophy:

Blackjack can be played in the following locations:

Retrieved from "https://reddead.fandom.com/wiki/Blackjack?oldid=393604"
Community content is available under CC-BY-SA unless otherwise noted.