“I found out why this town's called Blackwater, and it ain't nice.”

Blackwater is a location featured in Red Dead Redemption in the Great Plains region of the West Elizabeth territory.

Blackwater is an industrialized settlement and is the largest and most developed city in Red Dead Redemption, serving the area as a thriving port on Flat Iron Lake. It features cobblestone streets with lamps, the first production Automobiles, and telephone lines. The city has also been the site of a bloody gunfight dubbed "The Blackwater Massacre" of 1899. The massacre was apparently a bloody gunfight involving Landon Ricketts, who was the only known survivor of the incident. Some 22 outlaws and 15 lawmen are said to have perished during the battle.

The town is home to a fairly diverse population and a fairly diverse variety in neighborhoods. At the south of Blackwater, the town is less developed, with older buildings, slum houses, a couple of industrial properties and even a few plots of farmland. In contrast, the north of the town is not only home to Blackwater Plaza, the center of the city's economy and the state's government, but also high-class businesses and hotels, and one road leading out of the city (towards the Chapel) populated with larger homes for the wealthiest of Blackwater.

In terms of population, there is a wide variety in terms of wealth and race. A majority of the population is of Caucasian descent, however significant populations of minorities, including Chinese and African-Americans, reside in the town. In terms of wealth, the city has populations of the wealthy (mainly concentrated towards the north) and the poor (mainly located in the south), but also has a noticeable middle-class population.

The town is the biggest example of the modernization of the west, with new technology (most notably automobiles) coming into prominence. It represents the big city life which many families opted for in the early 1900's as the west was becoming more and more industrialized. Throughout the game, there are many examples of people, particularely in the Western towns like Armadillo in New Austin, speaking of how out East there is more development and city life is becoming more prominent. 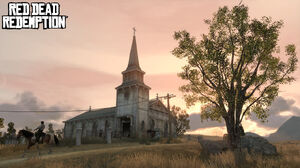 A chapel, surrounded by a large cemetery, is found on the hill overlooking Blackwater just on the outskirts of town. The chapel and cemetery feature in various missions and game modes as noted in the "Background" sections that follow.

Blackwater is the only town in Red Dead Redemption with notable street names. The names of the streets are:

Most of the streets are cobbled and the ones leading out of town turn from paved to dirt.

Compared to other settlements in the game, Blackwater features a more modern, structured law enforcement system, complete with a uniformed police unit and modern ranks. The Blackwater Police Department is by far the most effective law enforcement system in the game, with modern weaponry, large numbers of men and superior tactics, meaning that any hostile attacker or pneufier in the town will face severe opposition.

Blackwater becomes accessible once the player has gained access to West Elizabeth. It is by far the biggest sign of increasing government control and technology the player can see in the game. The only specific event known in its history is the aforementioned Blackwater Massacre, a large gunfight involving Landon Ricketts in 1899. The bloody gunfight apparently became an infamous event in Wild West history, and presumably led to the strengthening of the town law enforcement and the evolution of Blackwater from a frontier village into a pre-modern settlement.

During Undead Nightmare, this is one of 23 locations that must be cleared of the Undead and then protected from re-infestation thereafter. Three survivors are found defending the town, including local Gunsmith Elmer Purdy (the other two men appear to be Missing Persons Grover Boone and Orison Pratt). Other survivors found in story missions include Harold MacDougal, Mordecai Robbard's niece, Silas, Connie McTavish, Lucille Billingsgate, Archibald Andrews and Doreen and her family, stuck on the rooftop of a store. There are a total of twelve survivors in the town.

Marston walking on the streets of Blackwater.

An overview of Blackwater.

The ramshackle slums on the outskirts of Blackwater.

An undead appears from out of a grave at Blackwater's cemetery.

Retrieved from "https://reddead.fandom.com/wiki/Blackwater?oldid=292009"
Community content is available under CC-BY-SA unless otherwise noted.