Run by Oswald Dunbar, the Blackwater Police Department is one of two uniformed police forces in the series, maintaining order throughout West Elizabeth south of the Upper Montana River, namely in the Great Plains and Tall Trees regions. It remains one of the most numerous and effective law enforcement bodies in the West, with the only comparable one being the Saint Denis Police Department.

Not much is known about the department’s history besides the infamous "Blackwater Massacre" of 1899, a chaotic gunfight which featured legendary gunslinger Landon Ricketts, along with the Pinkerton National Detective Agency and the Van der Linde gang, which was in the process of a massive $150,000 ferry robbery.

In the aftermath of the Blackwater Massacre of 1899, the town goes on lockdown, along with the rest of southern West Elizabeth, with Pinkerton agents primarily patrolling the area, much to the displeasure of many residents.

After the crisis blows over, Blackwater continues to grow and by 1907 it has become among the most popular and industrialized towns in the West, with many NPCs remarking that the law is particularly well enforced. The small police station is situated on the east side of Blackwater, however, the city is building a new, bigger police station on a plaza in the northern end of the town, which is featured in Red Dead Redemption.

Their uniform consists of a dark blue coat with gold buttons, a badge, and a police hat.

The Blackwater Police Department is unique in that it is the only uniformed, non-military law enforcement in Red Dead Redemption. In addition to this, it also has a modern rank structure. Players will notice a significant presence of the Blackwater Police Department throughout West Elizabeth, meaning committing even minor offenses can be very dangerous.

Blackwater, being a bustling frontier city and burgeoning capitol, requires a larger police force than smaller settlements. However, they also share jurisdiction over the rest of the West Elizabeth territory and can be seen, especially in single-player, outside of the city, and patrolling the city's outskirts on horseback. Its officers are well-equipped with weapons such as the High Power Pistol, Semi-automatic Pistol, Winchester Repeater, and Pump-action Shotgun.

The Blackwater Police Department has a mounted division (covering most of the territory) in addition to regular, dismounted officers (seen only in the town itself) using its considerable size to its advantage. There is one police station in Blackwater; it is located near the territorial government building and is shared with the Bureau of Investigation and U.S. Marshals. The Blackwater Police also appear to be more capable in combat and have a smarter AI, as many players have noted; the officers are better able to climb ladders, navigate small spaces, and gain better firing positions. Their weapons are also more powerful than most law enforcement agencies, making them a very formidable fighting force. In addition, up to 50 officers can be mobilized at a time for confrontations in Blackwater.

The uniform worn by the Blackwater Police now consists of dark blue trousers, blue button-up coats, and a dark blue custodian helmet with the Department's insignia. 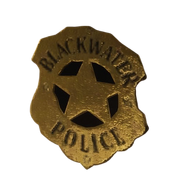 Blackwater Police Department in 1907
Add a photo to this gallery
Retrieved from "https://reddead.fandom.com/wiki/Blackwater_Police_Department?oldid=409326"
Community content is available under CC-BY-SA unless otherwise noted.