Blood Feuds, Ancient and Modern is a mission in Red Dead Redemption 2.

Suspecting it was Catherine Braithwaite who kidnapped Jack, the van der Linde gang ride to Braithwaite Manor to get him back.

After arriving back in camp, Arthur learns from Abigail that Jack has disappeared and the gang determines that the Braithwaites took him as revenge for the gang stealing their prized horses. Enraged, Arthur, Dutch, John, and most of the gang ride to Braithwaite Manor to get Jack.

After arriving, Dutch confronts one of the Braithwaites, and a gunfight erupts. After killing most of them, Dutch and Hosea venture inside the manor and find Catherine Braithwaite and her sons hiding in a room, barricaded inside. Outside, the gang then fights off an attack, and Arthur finds a way into the room. After killing two of Catherine's sons, the gang find Catherine and threaten her, demanding Jack's location. They search the house for Jack, but find nothing, and they decide to set the house on fire. Seeing that one of her sons is barely alive, Dutch shoots him to increase Catherine's agony, and he drags her out of her house as the rest of the gang burn the house.

Once outside, she reveals that her sons gave Jack to Angelo Bronte, and the gang decide to not kill her. As they ride off, she runs into her burning home and collapses shortly after entering the building, where she ultimately dies. The gang ride back to camp.

The gang arriving at the manor. 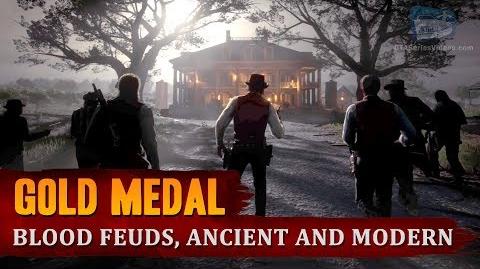