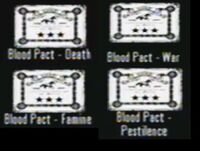 Blood Pacts are items featured in the Undead Nightmare expansion pack for Red Dead Redemption. They are used to summon the Four Horses of the Apocalypse.

These pacts work much like Horse Deeds. The player simply selects one of the pacts from the inventory to activate the associated horse. After doing so, whistling will call the selected horse to the player.

106.jpg
Pestilence is a white horse with patches of black spots on its body and bloody eyes and limbs. It is diseased and always has a green miasma following it.
107.jpg
Death is a black, tan, and white horse with a mist always following it. Death kills any undead it comes in contact with
108.jpg
War is red horse that causes any undead it comes into contact with to be set on fire. Its feet, tail, and mane are always on fire.
109.jpg
Famine is surrounded by locusts that follow it wherever it goes. It is black with a patch of white by its tail.

Pestilence, Famine, Death and War stand side by side
Add a photo to this gallery
Retrieved from "https://reddead.fandom.com/wiki/Blood_Pacts?oldid=327966"
Community content is available under CC-BY-SA unless otherwise noted.