View source
watch 01:13
What are boars?
Do you like this video?
Play Sound

They are large wild pigs that can be hunted by the player character for their tusks, meat, and skin, which are in turn sold for money to merchants. They are incredibly aggressive, almost always attacking the player on sight, by either ramming or headbutting the player. Boars may also attack NPCs and their horses. It usually requires only two or three hits to kill the player, making them very dangerous in groups.

Boars can be found in the plains of eastern New Austin, in the hills far north of the MacFarlane Ranch (near the river separating New Austin and West Elizabeth), in the area of Stillwater Creek, (though harder to find) southwest of Thieves' Landing, and in abundance in southeastern West Elizabeth. Primarily, follow the road south of Blackwater, continue along that road until finding a group of trees on the left side. Turn right, off the road and look around that area at around 7:30-8:00PM and the place should be flooded with Boars. Boars are also very common in the northern area of Tall Trees, although the player must watch out for wolves and, of course, bears.

Sometimes, many boars can be found near Manzanita Post. The best time to look for them here is early morning, from about 6:00-7:30AM.

With the additions of the Liars and Cheats DLC, Broken Tree becomes a hunting ground for boars.

On rare occasions, a single boar can be found being hunted by an NPC.

In Undead Nightmare, between the "T" and "I" of Nekoti Rock, 2-3 boars will spawn approximately every 3–4 minutes. 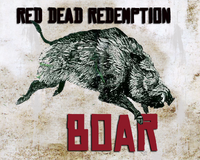 The player must kill a boar to successfully complete the following achievement/trophy: