Carmody Dell in The Heartlands, State of New Hanover

Bob Crawford Sr. lives with his son Bob Crawford Jr. in Carmody Dell and is Seamus' cousin by marriage. Bob Crawford purchased a stolen stagecoach, which Seamus asks Hosea and Arthur to steal for him.

If the player decides to rob him at night: Bob Crawford and his son are seen sleeping, and the player can steal items from the house. Meanwhile, Hosea works on stealing the stagecoach. Arthur meets him after clearing out the house and the two escape with the stagecoach, undetected throughout. 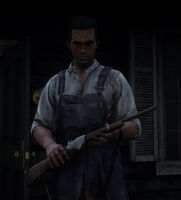 Bob Crawford sitting in his bedroom.