Bolger Glade is the site of a famous Civil War battlefield in Red Dead Redemption 2 and Red Dead Online in the Scarlett Meadows region of the Lemoyne territory.

It lies east of Braithwaite Manor near the southeast corner of Scarlett Meadows. The site is strewn with dilapidated breastworks, broken-down cannons, and various other debris from the battle. While the glade is marked on the players map, the point of interest is the cannons abandoned in the middle of the battlefield.

According to the Saint Denis Times, the engagement was known as the Battle of Scarlett Meadows and took place in 1864. Among the battle's Confederate leaders was General Quincy T. Harris, whom the newspaper describes as a courageous and heroic commander. 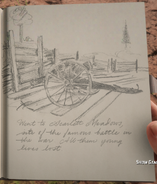 Arthur's drawing: "Went to Scarlett Meadows, site of the famous battle in the war. All them young lives lost." 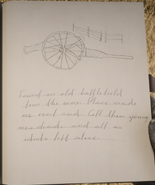 John's drawing: "Found the old battlefield from the war. Place made me real sad. All them young men dead, and all us idiots left alive."