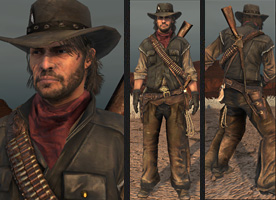 The Bollard Twins Outfit is an outfit available to be worn by John Marston and can be obtained in Red Dead Redemption' s single player campaign. This outfit is one of the nine required for the 100% game completion statistic.

"Disguise yourself as part of the Bollard Twins gang."

Wearing this outfit will allow you to be treated like one of their gang in Hennigan's Stead.

You have chaps and a red bandana. This could be a traditional cowboy attire in the real world.

You can find the requirements by looting the bodies in the mission "Justice in Pike's Basin".

Scrap 1: Search Thieves' Landing (Inside a chest, in an upstairs room in the warehouse by the pier. It can be looted during the Irish mission "On Shaky's Ground" or any other time in the game).

Scrap 3: Win at Horseshoes in MacFarlane's Ranch (The more you wager on the game, the more difficult your opponent. Just wager a dollar and it will be much easier to win.)

Scrap 6: Purchase at the tailor in Thieves' Landing (normally costs $150).

John Marston in a friendly game of Horseshoes wearing the Bollard Twins Outfit.
Add a photo to this gallery

thumb|left|300px|A full guide on how to acquire the Bollard Twins Outfit.

Obtaining the Bollard Twins Outfit contributes toward acquisition of the following Achievement/Trophy:

Retrieved from "https://reddead.fandom.com/wiki/Bollard_Twins_Outfit?oldid=196067"
Community content is available under CC-BY-SA unless otherwise noted.