The Bolt Action Rifle is a weapon featured in Red Dead Redemption.

The Bolt Action Rifle is a very versatile weapon due to its combination of high power, accuracy, good fire rate, and very fast reload time. While the five round magazine may be small, reloading the weapon with stripper clips is so fast that it is hardly a factor.

One clean shot to the torso will kill most NPCs, and the rifle is also capable of taking out a grizzly with a single, well-placed shot to the head. Accuracy is very important when using this weapon; if played on Expert Targeting and the target is in motion, it is a good idea to lead the target a little bit and wait until they are centered in the reticule before firing. If the target is stationary, just aim and blast away: even at very long ranges, the bullets will, nine times out of ten, go exactly where you are aiming. In fact, in the mission "Great Men are Not Always Wise", it is possible to get one-hit kills on the bandits even from across town.

The Bolt Action Rifle is very effective in PvP; it is capable of killing with one hit if the shot is accurate.

The Bolt Action Rifle shown on Marston's back 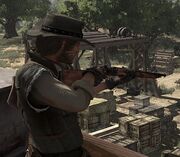 John using the Bolt Action Rifle
Add a photo to this gallery
Retrieved from "https://reddead.fandom.com/wiki/Bolt_Action_Rifle?oldid=388297"
Community content is available under CC-BY-SA unless otherwise noted.