The Bolt Action Rifle is a weapon featured in Red Dead Redemption 2 and Red Dead Online.

The B.D. & Co. Bolt Action is a strong and versatile rifle, built to perform in any environment. The bolt-action mechanism allows for quick firing and reloading, making this rifle an ideal choice for long-range combat with multiple targets. This gun has an ammo capacity of five rounds, and can use Regular, High Velocity, Split Point, Express and Explosive rifle ammo.

A Bolt Action Rifle on a counter

A Bolt Action Rifle sniper on a counter

Shown in the Wheeler Rawson and Co. Catalogue

A first-person view of the Bolt Action Rifle 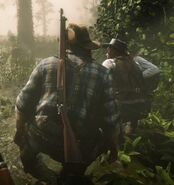 Retrieved from "https://reddead.fandom.com/wiki/Bolt_Action_Rifle_(RDR_2)?oldid=407946"
Community content is available under CC-BY-SA unless otherwise noted.