With the addition of the Liars and Cheats DLC pack for Redemption, Bonnie MacFarlane is also a multiplayer character model that may be selected in the "Redemption" section of the Outfitter.

Bonnie is the daughter of Drew MacFarlane, the owner of MacFarlane's Ranch, and has spent her whole life working on the ranch with her father. Born in 1884, she shares the same birth year as one of her brothers, Ethan, so it’s most likely that they are fraternal twins. When she was young, her father hired a "French" governess (who Bonnie suspected of not being truly French, due to the fact she spoke Russian) to teach her and keep her civilized. She had six brothers, but five of them died from either illness or accidents. Her sole surviving brother, Patrick MacFarlane, moved to New York, where he supposedly works as a banker in Manhattan. With the majority of her generation deceased and the only other surviving male child leaving the family, Bonnie feels it is up to her to become the man of their family's ranch.

The protagonist can encounter Bonnie on the porch of her home at MacFarlane's Ranch. She will initially mistake them for a robber, but soon deduces that they are actually looking for work, and proceeds to explain that she and her father are planning on packing up and moving for a while to avoid the cholera outbreak that has swept through Armadillo. Amos then interrupts their conversation to reveal that one of their wagons has gone missing, leading to Bonnie sending the protagonist to retrieve it, promising to pay them on their return.

Afterward, Bonnie can be found again at MacFarlane's Ranch, and will offer recovery, delivery, escort, and hunting missions to the player. Accepting her missions will increase the player's honor.

Bonnie is mentioned along with her father Drew as having to get out of New Austin temporarily due to a cholera outbreak afflicting the populace in the territory.

Arthur Morgan can come across a possible suitor of hers, south of Van Horn Trading Post. Arthur finds him near-death and obtains a letter from him titled "Letter to Bonnie MacFarlane". The letter details her father's disapproval of him, leading him to leave to "make his fortune" in an effort to gain his approval and return to her.

She is first seen on the train from Blackwater. The next morning, Bonnie rescues John by the road after he is seriously wounded in the initial confrontation with Bill Williamson at Fort Mercer. Bonnie pays a doctor $15 for Marston's treatment and provides lodging in return for assistance with duties on the ranch. John does several missions at the ranch. After finding out that John is at the ranch, Bill Williamson's men set the ranch's barn on fire and John risks his life to rescue the horses out of the burning barn.

Bonnie is later taken hostage by members of Bill Williamson's gang, looking to exchange her for Norman Deek from the Armadillo jail. After traveling to the ghost town of Tumbleweed and attempting to hand the man over, it is revealed to be an ambush. The gang attempts to hang a brutally beaten Bonnie, but the rope tightens around the side of her throat, preventing her neck from being broken. After an intense battle, John then cuts the rope (provided that he hadn’t previously severed it by shooting it) and Marshal Leigh Johnson then takes her back to Armadillo after all of Williamson's goons are killed.

After the death of Dutch van der Linde, John returns to MacFarlane's Ranch with Jack and visits Bonnie to purchase cattle. She helps them to herd the cattle back to Beecher's Hope, accompanying them to just beyond the outskirts of the ranch. Shortly after, Bonnie calls upon John by telegraph to bring the ranch some corn to make up for crops lost to pests at their ranch.

Her request is received, so John and Abigail Marston visit the ranch. Miss MacFarlane has a friendly conversation with Abigail, who later states that she liked Bonnie. Afterward, the Marston couple leaves the ranch; Bonnie gazes longingly after the couple, shuffling her feet as she watches the wagon leave. She then turns to Amos as he walks into the general store and then follows him in, marking her last appearance in the main storyline. It is suggested by Abigail that Bonnie had developed feelings for John. The way in which she stared at the two as they left also supports this.

It is unknown if she ever learns of Marston's death.

By 1914, Bonnie has already gotten married, though it is not stated to whom. Jack Marston is still welcome at the MacFarlane's Ranch and is able to make use of the cabin his father once recovered in. Bonnie is not seen by Jack, although the ranch operates just as it did in 1911.

In 1914, NPCs can be heard discussing that she found a husband. 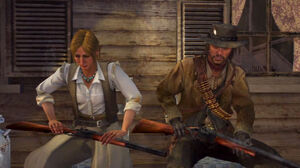 Bonnie appears at the ranch, seemingly unfazed by the zombie epidemic, but seems mentally disturbed from her words. She nonchalantly tells John that her father Drew MacFarlane was rounding up the undead in the barn and was there since the day before, and asks John to check on him, which begins the side-mission "Paternal Pride". After John tells her the fate of her father, she states she is glad that he fought protecting those he loved and walks back into the house. After that, she isn't seen for the rest of the game. 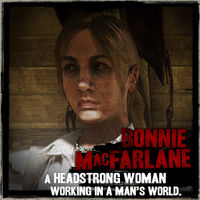 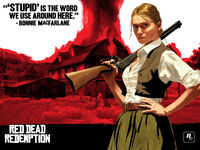 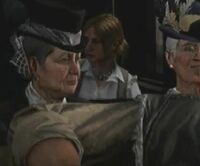 Bonnie on the train from Blackwater 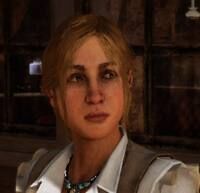 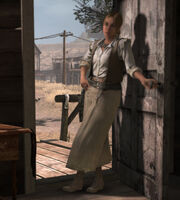 After being saved by Marston 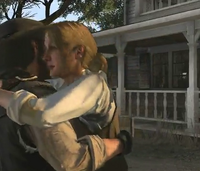 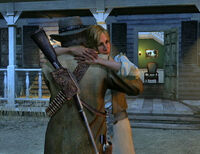 Bonnie and John in Undead Nightmare

Bonnie's suitor before the encounter, surrounded by vultures and crabs

Bonnie's suitor giving his letter to Arthur Morgan before passing out

Bonnie's suitor after passing out. Reticle will still show him being alive. 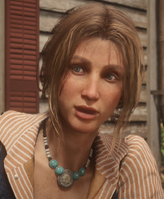 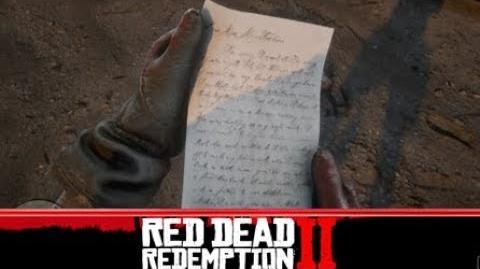