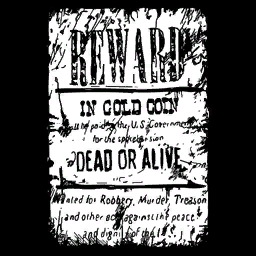 A Bounty is a monetary amount offered for the apprehension or elimination of an individual. In Red Dead Redemption, Red Dead Redemption 2 and Red Dead Online, the player can acquire a bounty in both single player and multiplayer for committing crimes, but can also be a bounty hunter themselves, hunting down NPCs that have bounties on their heads.

If the player commits a crime which is witnessed by someone and that person is able to report it, a bounty will be issued. The bounty level will be determined by the crime(s) committed and committing any additional crimes beyond that will increase the existing bounty level. Crimes with no witnesses and crimes where all witnesses are either bribed or killed before they can report it will not cause a bounty to be issued although Honor will still be lost. Sheriffs, deputies, bounty hunters, and other lawmen will attempt to apprehend or kill the player to collect on the bounty if the player has one.

The Heads-Up Display provides a wanted meter to indicate the manpower strength of the pursuing bounty collectors or lawmen and the remaining time until pursuit is broken off. The player must avoid detection in order to escape pursuit, though eventually, a new set of bounty hunters will pick up the trail.

If and when a crime is witnessed, the eyewitness can be either killed or bribed before they are able to notify the law.

Jack, John, and Arthur can be bounty hunters themselves too; bounties will be issued on NPCs and the characters can track down these NPCs and either apprehend and turn them in, or kill them for a reward. Bounties can be found either through missions or posters.

These crimes will if committed, witnessed and reported cause a bounty of the following amount to be issued;

If the player already has a bounty on their head while committing any of these crimes, the bounty will be increased by the amount listed.

All of these values will be cut in half if the player has obtained the highest Fame rank.

In Red Dead Redemption 2 the highest achievable bounty is $1500. The maximum bounty limit increases at the start of every chapter, eventually capping out at $1500 by the epilogue.

If Marston does not resist arrest (holsters his weapon and stands still while the lawmen close in), he will be placed in jail. Money will be subtracted from the player's balance to pay off the bounty when leaving the jail. If the player has insufficient funds, they will have to complete bounty hunting missions or simply earn more money to pay off the balance.

A Pardon Letter can be used to instantly clear an active bounty. This is done by taking it to a Telegraph Office and handing it in.

For Arthur (and John), the only way to get rid of one's bounty is by paying it at a Post Office. However, for minor crimes, or a long time has elapsed since the crime, law enforcement may not recognize the player character and won't attempt to arrest him.

The player character can also surrender to law enforcement if he hasn't initiated combat with them yet. It will show a cutscene of Arthur/John in a jail cell, and him eventually being released with funds taken from him, or a Van der Linde gang member will visit to release Arthur (Abigail will visit to release John). While a gang member is present, cheats cannot be used to reduce the bounty level below 125.

If the player wears a bandana while evading pursuit from the law, the wanted meter will decrease at a significantly slower rate. If being pursued, remove the bandana in order to better evade apprehension by law officers and bounty hunters.

Changing clothing before and after the crime will also hinder law enforcement's ability to find and recognize you.

A bounty that exceeds $150 will result in posses forming and trying to ambush the player (the higher the bounty, the more ambushes occur). This will take place every 30–40 minutes in real time.

If an eyewitness gets far enough away (or the player gets far enough away from them), a posse will form at the point where the report took place. Alternatively, posses form in the wilderness, with composition and size based on bounty amount. A posse is made up of three or more lawmen, and if the bounty is high enough, they arrive with dogs. The player cannot hide from posses that have at least one dog alive, as they have an infinite search radius and will always know where the player is. Sometimes, if the player travels far enough away from any settlements, the posse will be made up of bounty hunters instead of lawmen.

The player can escape a posse only by getting outside the search radius on the map, which is much larger than usual if the posse contains dogs as part of it. The posse will accept surrender and take you to jail, or kill you if you resist. The player can lose the Wanted level either by staying hidden, bribing or by killing all members of the posse. If the posse was formed from a witness report, and the player killed all members of it, the bounty will then be rolled back to the value it was at before the posse formed since there is no one left alive to tell the tale of what happened.

In Red Dead Redemption 2, when committing enough crimes, a town will go into lockdown, indicated by a red border around it on the map. While in lockdown, all shops and provision areas will be closed and the town will be patrolled by lawmen, who will shoot the player character on sight, should he be recognized. While most towns will come out of lockdown after a certain amount of time, Blackwater will be in lockdown from the beginning of the game and will remain so until the end of Chapter 6, when the Van der Linde gang has disbanded. Attempting to enter West Elizabeth beforehand will result in multiple Pinkertons spawning, who will know Arthur's location immediately. Should Arthur attempt to enter New Austin he will be killed by a seemingly-invisible sniper. After certain missions in the game a town will inevitably go into lockdown, such as "Blessed are the Meek?" and "The Sheep and the Goats" in Chapter 2, which will lockdown Strawberry and Valentine respectively.

Accumulating a bounty is required or can contribute towards completion of the following Trophies/Achievements: