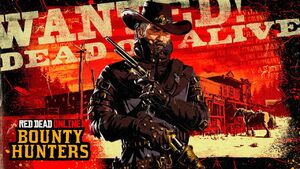 Bounty Hunter is one of the five specialist Roles in Red Dead Online.

Bounty Hunters track down dangerous criminals, turning them in dead or alive in return for a reward.[1]

To get started as a Bounty Hunter the player must obtain the Bounty Hunter License in Rhodes, or from any Bounty Board if they did not obtain one in the introductory cinematic. The standard cost is 15 Gold Bars, but promotions or limited offers can make the license discounted or completely free. After obtaining a license, they will be able to go to any Bounty Poster across the map to start a bounty hunting mission, which rewards them with money, gold, and experience.

Licensed Bounty Hunters can pick up work by visiting bounty boards located near law offices, post offices and train stations across the states. There is no shortage of criminals to be dealt with and they range in difficulty, from lone low-level criminals to notorious outlaws with armed protection details and a watchful eye. Taking on an armed gang or bringing multiple targets to justice is made easier with the help of a Posse, who all will earn a cut. And keep in mind, bringing in targets alive will yield a greater reward.

Becoming a Bounty Hunter Rank 12 will open up the opportunity to hunt other online players with a bounty of $20 or more. Bounty Hunters will be notified through an invite about the opportunity to hunt down the wanted player when they’re nearby in a structured pursuit. The wanted player must escape (or surrender) within the allotted time and if captured, they’ll also have opportunities to escape and flee. If the Bounty Hunter brings the target alive, they’ll receive an award while the criminal serves time. For each dollar the criminal is worth, a second is served in jail. This makes a criminal worth $20 spend 20 seconds in jail.

Two of the most important pieces of equipment to obtain for the bounty hunter role as soon as possible are the Reinforced Lasso and the Bounty Wagon. The Reinforced Lasso will secure targets far better than a normal lasso and will greatly lessen their chances of breaking free. The Bounty Wagon will contain a certain number of targets and they will be unable to escape from it.

The behavior of each target varies as well as the level of protection and situation they are in.

Some targets will fight alongside their guards, but more often some will flee once the fighting starts. When it comes to the former, it can be especially dangerous during a firefight as the player might mistake them for a regular enemy and kill them. It is imperative that the player buys the Reinforced Lasso and a Bounty Wagon in order to transport them without fear of them escaping.

When it comes to their locations, some may be located in camps of gang hideouts while others may be traveling. In the case of the latter, they can be found riding aboard trains and caravans, which the player will be forced to pursue.

Out of all the Specialist Roles to date, the Bounty Hunter role has the worst cash payout of them all, though it can still be very profitable if done efficiently and provides a viable way to earn gold.

Like Stranger Missions in Online, the player will receive a larger profit for their efforts if they complete their tasks late into the timer. For every three minutes in the timer, the payout in cash and gold increases. Another very important thing to note is that bounties will always pay more if the target is turned in alive.

There are two types of bounties: a normal bounty and a legendary one. Normal bounties are easier and are initially accessible as the player starts. The number of dollar signs on the wanted posters on the Bounty Boards is indicative the amount of profit.

Legendary Bounties are the most dangerous bounty targets from across the five states. They are more challenging and have their very own backstories and cutscenes; they reward significantly more than normal bounties. There is a limited number of 10 legendary bounties, which can be replayed. The difficulty will increase after each completion, up to a maximum of 5 stars. 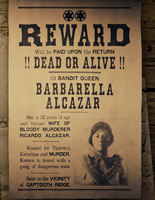 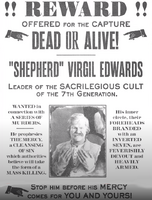 Retrieved from "https://reddead.fandom.com/wiki/Bounty_Hunter_(Red_Dead_Online)?oldid=414282"
Community content is available under CC-BY-SA unless otherwise noted.