The Broken Pirate Sword is a weapon featured in Red Dead Redemption 2. It cannot be customized.

An old and rare pirate cutlass, with a long snapped blade and decorative golden handguard. With a longer range than most bladed melee weapons, this is still a practical combat weapon despite its age.[1]

This sword can be found lodged inside an abandoned boat south of Saint Denis's southern bridge on one of the small islands. 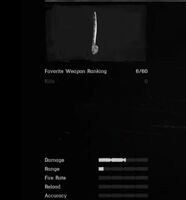