In Red Dead Redemption, the Browning Gun appears as a mounted weapon on an early-model armored truck in the mission "And You Will Know The Truth", where it is used by John Marston against Dutch's Gang. It is later featured in the final mission, where it a unique version with a frontal shield is used by Dutch himself. Outside of missions, a Browning is usable from the roof of the player's safehouse in El Matadero and Cochinay in the Single Player campaign. Just like the Gatling Gun, the Browning Gun has unlimited ammunition.

In Undead Nightmare, the Browning can be found in the same locations as in the singleplayer campaign and it still comes with unlimited ammunition. John Marston can apply Phosphorus Coating to the gun's ammo supply to make it extremely effective at killing the undead.

In multiplayer, the Browning can be found in Cochinay far to the north, as well as on the roof of the central building in El Matadero.

In Red Dead Redemption 2, Agent Milton uses a Browning Gun to assault the Van der Linde gang's camp at Lakay. The Lemoyne Raiders use one against Arthur and Lenny during Preaching Forgiveness as He Went. A bounty hunter in a wagon also uses the gun to attempt to take down Black Belle. Also, US Army Soldiers stationed at Fort Wallace use the gun against the player if they enter the fort. Lemoyne Raiders can also use it in random events and can be seen in a few gang hideouts, such as Hanging Dog Ranch. Finally, Arthur uses one during the mission "Our Best Selves", to defend the train from US Army reinforcements.

John Marston with a Browning Gun in an automobile 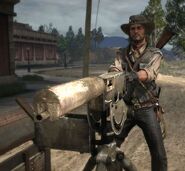 The Browning Gun can be used to unlock the following Trophies/Achievements: