Brynn Tildon is a journalist who writes for the Saint Denis Times.

Brynn Tildon attends the party at Mayor Lemieux's residence and is seen speaking with Hector Fellowes and Bill Williamson. During the conversation, Bill struggles to coherently respond to his questions, although he appears less annoyed than Fellowes, who cuts in and berates Tildon before leaving. 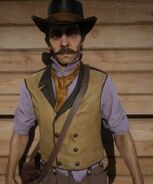