With the addition of the Legends and Killers DLC pack, Buffalo Soldier is a multiplayer character model in Red Dead Redemption.

Buffalo Soldier was a soldier in the U.S. Army. He was captured by General Diego and forced to work in the Bear Mountain Mine. Buffalo tells Red that he was a former slave.

When Red Harlow is captured by Diego, he is thrown in the same cell as the Soldier. They begin to talk, and a few hours later, Red's cousin Shadow Wolf arrives to rescue them. After escaping their cells in the mine, Buffalo then makes his way to Brimstone on a stagecoach to tell Governor Griffon to send U.S. reinforcements against the Mexican Army. After fending off bandits and arriving at Brimstone, he goes to tell the Governor only to be locked up again by the Governor himself, who is working with Diego. However, he is freed in the attack on the Governor's mansion, and joins Red in the fight. After they reach the roof, a TNT explosion cripples him, but he urges Red to go on without him. After Red killed Griffon, it is revealed that he survived the ordeal. Sheriff Bartlett offers money to Red for killing Griffon, Red decline, taking Griffon's Scorpion Revolver and giving Buffalo Soldeir his Old Pistol.

His equipment consists of a US Cavalry Uniform (a blue formal military suit with a small, slanted cap called a kepi), and a Repeater Rifle with attached bayonet. Contrary to popular opinion the repeating rifle is not inaccurate, the Union army began using repeating rifles (Spencer repeating rifle M1861) in limited numbers as early as 1864 ). Additionally the 9th and 10th Cav (Coloured) were not formed until 1867. The Repeater itself is most likely a Winchester Repeater, the Repeater of choice at the time, and one of the most well known guns in American history.

Buffalo Soldier in as he appears in the Legends and Killers DLC. 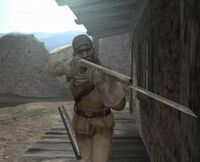 Retrieved from "https://reddead.fandom.com/wiki/Buffalo_Soldier?oldid=232128"
Community content is available under CC-BY-SA unless otherwise noted.