Red Dead Wiki
Register
Don't have an account?
Sign In
Advertisement
in: Multiplayer, Animals, Transportation in Revolver,
and 2 more
English

A Bull is an animal that appears in both Red Dead Revolver and Red Dead Redemption.

A bull is available as a mount for Annie Stoakes in the mission "Range War".

Bulls are rare in Red Dead Redemption, appearing individually only in a couple of areas. Bulls can be hunted, but killing a penned bull counts as a crime. They are distinguishable from the other cattle by their large size, and they will charge the player if approached, knocking them down. To get the bull out of the pen you have to lure it into the stables beside the chicken coop and make it chase you out of the stables. Killing the bull is no longer a crime.

Two bulls, Bonzo and Super Bull, are available as unlockable mounts in multiplayer.

There is a bull located in MacFarlane's Ranch, in the cattle pen. Be warned that killing a bull is a crime, and ranch owners won't take it lightly when the player shoots their cattle. Another bull can be found in and around the Twin Rocks gang hideout when it is completed. 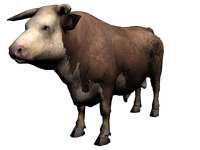 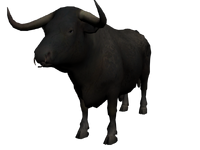 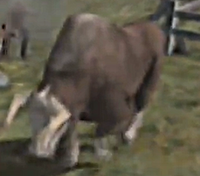 A bull from Revolver