“Where's them cattle? Did you take them to pasture?”

By Sweat and Toil is the fiftieth mission in Red Dead Redemption.

The lazy and asleep Uncle has neglected to herd the cattle out to the pasture, and John is forced to do it with him. After herding the cattle up, the two lead the cows out to a pasture, expecting a peaceful time.

But as the two are riding, they spot a train in the distance going down its tracks, heading for Blackwater. Suddenly, explosives go off around the tracks and bandits pop out, attempting to rob the train. Spooked by the explosives, the cattle begin to stampede. At this point, Marston must choose whether to intervene in the robbery or to stay with the herd. If he chooses to intervene, Uncle leaves to regain control of the herd while Marston rides to stop the robbery. If he stays with the herd, both Uncle and Marston must attempt to head off the herd and regain control of them, then herd them back to the farm.

Marston battles with the bandits, gunning them down and saving the train. The train conductor thanks John for saving his and the passengers' lives and John rides off to meet up with Uncle. Eventually, John finds Uncle and herds the cattle together, and the two succeed in bringing the cattle to the pasture.

Get in position behind the cattle and herd them out of the ranch. Next, you'll have to herd them out of Beecher's Hope. You won't have to worry about the stragglers all the time, as Uncle will sometimes shout something like, "You stay there!" and he'll go round them up. As soon as you pass the big road leading to Blackwater, you'll see some explosions in the far distance and a train getting robbed right after. All of the cows will start stampeding and Uncle tells you to quickly stop them by moving in front of them. You can then choose whether to help the train or stay with the herd, though Uncle insists you stay with the herd as "You don't need trouble". If you do help them, Marston will go to the train engineer who will thank him for saving the train, but you won't receive any honor, money or fame.

Either way, once you're past the train, simply keep herding the flock until you reach your target and the mission will be done as you can just leave the herd at the pasture.

Main article: By Sweat and Toil/dialogues 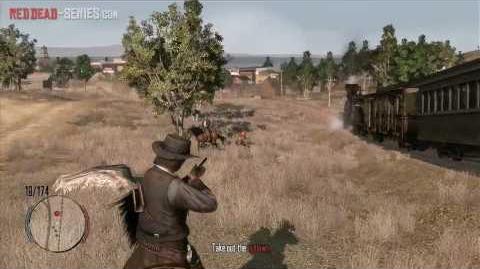 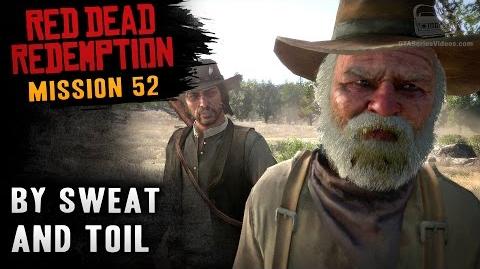 Retrieved from "https://reddead.fandom.com/wiki/By_Sweat_and_Toil?oldid=360739"
Community content is available under CC-BY-SA unless otherwise noted.