Very high
Calloway's Revolver is a weapon featured in Red Dead Redemption 2. It cannot be customized.

A unique, custom-engraved Schofield Revolver plated in silver, with "Canis Canem Edit" engraved into the side of the barrel. This sidearm previously belonged to the late gunslinger Jim "Boy" Calloway, who was defeated in a duel at Brandywine Drop. This gun has an ammo capacity of six rounds and can use Regular, High Velocity, Split Point, Express and Explosive revolver ammo.

This revolver is lootable from the corpse of Jim "Boy" Calloway, who is the last duelist in "The Noblest of Men, and a Woman". Alternatively, the player can obtain it before initiating the mission, by simply shooting Calloway in the saloon and picking up the weapon. This only works on v. 1.00.[1]

Another method of early acquisition includes making the mission become unavailable and chasing Calloway until he gets on horseback and starts fleeing. Then the player must catch up to Calloway and jump on his horse which will make him draw his gun. Then Arthur must tackle him and he will drop his gun on the ground and the weapon can be picked up.[2] 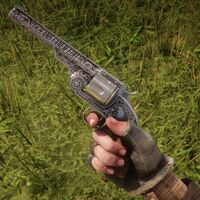 Calloway's Revolver obtained before initiating "The Noblest of Man, and a Woman"

Calloway's Revolver on the ground