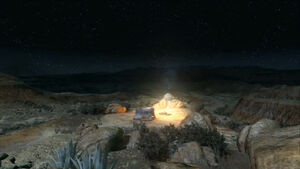 Camps are temporary resting points established in the wilderness. In Red Dead Redemption, camps also provide the player with the ability to save the game, change outfits, and fast travel. In Red Dead Redemption 2, camps are further expanded wherein players can avail to a small camp or the main camp - the Van der Linde camp where the player can modify their character, interact with fellow gang members, sleep, do chores or fast travel.

Camps are an essential component in the American West at the time of Red Dead Revolver, Red Dead Redemption and Red Dead Redemption 2, due to the distance and travel time between settlements. Camps provide an opportunity for individuals and their horses to eat and rest; campfires are integral to provide light and keep predatory animals away. Rudimentary tents provide shelter from the elements and mild comfort.

In Red Dead Redemption, two types of camps exist - those established by the player and fixed or random campsites that are often populated with NPCs.

The player can establish a camp anywhere in the wilderness, with the exception of areas close to towns, settlements or gang hideouts, and areas near roads or bodies of water. After establishing a camp, the player can save game progress, change outfits, or fast travel to another destination.

The Basic Campsite that the player begins the game which can be upgraded to the Improved Campsite, which also refills ammunition. This can be purchased at most general stores. Each type is found in the Kit section of the player's inventory.

Campsites exist in some fixed locations and also spawn randomly across the wilderness. Often NPCs will be present at these campsites and the player can choose to rest for a while and hear their tales by the campfire. Sometimes these tales relate to the player's own adventures in Red Dead Redemption. NPCs may also tell stories related to the narrative of Red Dead Revolver.

In a random encounter, one may find a campsite filled with TNT and several people working. If Marston is close enough, he will hear a short conversation between the men, in which one warns the other to be careful with the explosives. A short while later a massive explosion wipes out the camp along with the men, Marston (if he is close enough), and any wildlife unlucky enough to be near the site.

Player campsites are not available in Undead Nightmare.

Non-player camps in Undead Nightmare can be of several different kinds:

The last two are the only types that will have conversations with John about their experiences in the apocalypse. They will even offer John a limb or bone to eat from, which will make him vomit.

In Red Dead Redemption 2, there are three types of camps in the game - the main camp where the Van der Linde gang resides, camps established by the player, and fixed or random campsites that are often populated with NPCs.

As they hide from the law, the members of the Van der Linde gang spend their time on various camps around the Country. The members perform various small tasks to keep the camp in shape and their overall morale high. Arthur Morgan can interact with and accept passive missions (such as bringing some coffee to Pearson) from his fellow gang members. While the player isn't punished for ignoring the rest of the gang, the other members will voice their disappointment if left alone for long periods of time. To purchase upgrades for the camp, the player must unlock the ledger by completing "Money Lending and Other Sins I & II ". In camp, players can check on the status of the medical, munitions' and provisions' wagons. These wagons can be restocked through the ledger to provide Arthur supplies. The supplies' statuses are indicated in colors - red, white and gold indicate low, medium and high amount of supplies respectively.

Camp membership is fluid, and players may find that members leave or arrive while they are away. Quests can reveal their whereabouts. Time of day also influences whom players may interact with at the camp. While keeping morale high is optional, it provides various benefits, such as additional supplies and bonuses.[1]

Players should note that being absent from camp for a long period of time (more than three days) will result in honor loss for Arthur when he goes back to camp. Javier, Charles or Bill may be sent to retrieve Arthur, but regardless of the player's decision to ride with him or stay, the honor loss will still apply.

Arthur can increase his honor by carrying out various chores in camp by himself. Chores can be done from morning to late afternoon. They are indicated by a black dot on the player's map. The chores include carrying hay bales to horses, carrying maize sacks to Pearson's wagon and chopping firewood. Carrying out chores increases Arthur's honor.

Starting from Chapter 5, Arthur can no longer carry out chores in camp, as he becomes sick.

Aside from item requests, all missable fellow members' activities such as fishing and stagecoach robberies are given in camps. These activities are only available for a few days. Once missed, Arthur cannot join them.

Arthur can donate hunting goods to Pearson for provision, crafting, and funds at the camp's butcher table. Arthur can also donate valuables or money to the camp money box. Donations are introduced at the end of "Eastward Bound".

In terms of provisions, Arthur can donate uncooked meat or animal carcasses to Pearson to make the camp stew, which increases his Honor. High quality meat, such as prime beef joint, gristly mutton and succulent fish are much preferred over low quality meat such as gritty meat and gamey bird meat. Depending on the quality of the donated meat, Pearson and Arthur will both react differently. Camp members will also react differently when eating the camp stew. Members will praise a stew made of high-quality meat, and complain if the stew is made of low-quality meat. When Pearson's provisions run low, camp morale will also be low. In this case, Dutch may comment that camp members are on the brink of "rebellion".

Arthur must purchase leather working tools through the ledger before Pearson can craft any items. Nonetheless, Arthur can donate perfect (three-star) animal pelts and carcasses to Pearson for crafting in advance, as the materials will be stored. Imperfect pelts and carcasses can only be donated either for funds or provisions. Pearson can use certain pelts to craft Arthur's satchel, which helps increase its capacity. Pearson can craft various camp accessories by using perfect pelts and animal carcasses, but these accessories are for decorative purposes only. The recipes can be viewed on the crafting interface when interacting with Pearson.

Arthur can donate money and items for funds. Pearson accepts animal parts such as feathers, tusks and fangs for funds. Otherwise, Arthur can directly donate valuables to the camp cash box. The funds can be used to purchase camp upgrades.

The gang camp can be further upgraded to unlock additional features through the ledger. The upgrade list are as follows.

In an attempt to cut down on lengthy travel times, Arthur's tent can be upgraded as a Fast Travel point.[2]

Arthur can play several table games with fellow gang members. Who Arthur will face as opponents in the table game depends on story progress and the gang member's availability. The table game type also depends on story progress. The player can gamble for money in Poker and Five Finger Fillet, but not Dominoes. The cost and payout of the gambling games are also much lower than that in towns. The following is a list of games and their available opponents.

Starting from chapter 5, Arthur can no longer play table games at camp as he becomes sick and the overall camp mood deteriorates.

After the mission "Red Dead Redemption", the camp is replaced by Safehouses.

Player-founded camps are further expanded, the player can establish a camp anywhere in the wilderness, with the exception of areas close to towns, settlements or gang hideouts, and areas near roads or bodies of water.

After establishing a camp, the player can set up a tent, save game progress, sleep and rest between days (up to 24 hours), or cook and craft food and materials. Setting up camp in Roanoke Ridge may lead to special encounters with the Murfree Broods, who warn the player to stay out of their territory.

NPC camps can be found at fixed locations. They can be easily located as their campfires produce black smoke in the sky. Larger camps are found at the outskirts of towns, such as the camps in Valentine and Blackwater. The player is free to use the campfire in these "public" camps without consequences. Supplies such as provisions also spawn in these camps. Taking these supplies is considered theft, but will not result in honor loss. Dogs also occasionally wander around these camps.

Smaller camps occupied by one or two travelers can be found in the wilderness. However, these "private" camps are not welcoming towards the player. Should the player go in these camps or wander around them for too long, the occupants will warn the player to leave and turn hostile if the player refuses. These camps will always have one or two horses hitched nearby. The player may also witness camps being looted by Murfree Broods in Roanoke Ridge.

Rival gangs also set up camps at fixed locations. These camps are occupied by four to six gang members, who will immediately turn hostile when they spot the player approaching them. On some occasions, two additional members will arrive on horses after the camp occupants are killed. The campfire will always go out after the player clears out the occupants in these camps, disallowing the player from using it to craft items. Ammo boxes and medical boxes are available in some camps. Among the many rival camps, there is a special encounter in Roanoke Ridge where a Murfree Brood tries to lure and rob the player by faking cries in a tent.

NPC Camps may have tents. The player can rest and sleep in them.

Some items can only be created at the camp's fire. The below details tonics and similar items. Note that cooking recipes have their own page.

The player can set up and customize camp across the map. A small camp can hold between 1-4 Posse Members and has a daily maintenance fee of $1.00. A large camp is available only to Persistent Posses, holding 1-7 Posse Members for a $2.00 daily fee. Camps can be set up in Big Valley, Bayou Nwa, Cholla Springs, Cumberland Forest, Gaptooth Ridge, Grizzlies, Heartland Overflow, Hennigan's Stead, Río Bravo, Roanoke Ridge, Scarlett Meadows and Tall Trees.

The camp will stay in a fixed location but later changes location automatically every in-game day.[3]

Below are all possible online camp upgrades. Near the wagon inside the player's camp, the player can access Wilderness Outfitters, which allows the camp to be customized and upgraded.

John Marston listens to the stories of fellow travelers.

Retrieved from "https://reddead.fandom.com/wiki/Camps?oldid=393268"
Community content is available under CC-BY-SA unless otherwise noted.