Carmela "La Muñeca" Montez is a legendary bounty target featured in Red Dead Online. Her bounty is only available to players who have obtained The Prestigious Bounty Hunter License.

Carmela is cold-blooded murderer with an doe-eyed innocent face. She is the kin of notorious Del Lobo Gang members, Alfredo and Jorge Montez and is the boss of her own gang of Del Lobo members. They are responsible for a string of ruthless highway robberies throughout New Austin and West Elizabeth.

The player must track her and her gang down at Hanging Dog Ranch and bring her in dead or alive. Upon approaching the gang, Carmela will assume position in an armored war wagon and uses a machine gun to shoot at the player. 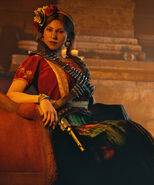