Settlements and nearby homesteads

The Cat is a species of animal found in Red Dead Redemption 2.

In-game, they are referred to as American Domestic Cats. They are sometimes found catching brown rats or small songbirds, or carrying them around.

Cats are most commonly found in Strawberry. However, they can also be found in Saint Denis, Valentine, Emerald Ranch, Rhodes, and the Blackwater Cemetery.

Thin Cat with a Pigeon 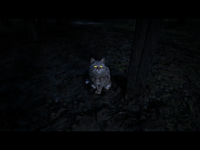 Cat With Eyes Reflecting the Light

Near View of the Cat via Photo Mode, Located in Emerald Ranch

A Cat with a Rat

Cat inside the Fence in Saint Denis

Cat near the Fence in Rhodes

Cat at the Welcome Center