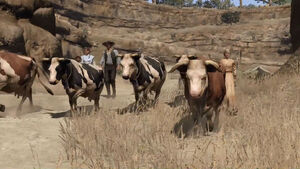 Cattle Rustling is an illegal activity featured in Red Dead Redemption that involves the theft of Cattle.

Cattle Rustling plays an important role in story missions and other aspects of Red Dead Redemption. Specifically, it is a factor in the following:

Although there is no game mechanic to support the player stealing cattle, a form of rustling can be performed by slaughtering and skinning cattle and then selling the loot. This is an easy way to make cash early on in the game.

This form of cattle rustling is best done at night when the ranchers are in their houses. There is no need to try to herd the cattle outside, as no NPCs should be able to see the player. Kill all the cattle with a silent weapon, either a Hunting Knife or Throwing Knives. Avoid using firearms, as they tend to make a lot of noise and attract more attention. However, if in a deserted area, use a weapon with lots of bullets and quickly enter Dead Eye to get headshots on as many cows as possible. It takes about two melee slashes (on foot - one on a horse) or two throwing knives (on foot - one on a horse) to kill a cow or bull. Afterwards, skin all the cows and sell the proceeds.

Sometimes after one cow is killed, another cow will respawn, and this can repeat for quite some time.

One group of playable Multiplayer Characters are called Cattle Rustlers. These characters use the same character models and outfits as the Bollard Twins Gang, who sometimes feature as rustlers in single player.

Retrieved from "https://reddead.fandom.com/wiki/Cattle_Rustling?oldid=388354"
Community content is available under CC-BY-SA unless otherwise noted.