A popular and classic sidearm, the Buck Cattleman is a great all-around revolver, featuring a good balance of damage, accuracy and fire rate. Suited for close to medium-range combat, this gun can also be dual-wielded and used on horseback. This gun has an ammo capacity of six rounds, and can use Regular, High Velocity, Split Point, Express and Explosive revolver ammo.[1]

The Cattleman Revolver is a good all-around weapon for most situations. It has a high fire rate when fired from the hip, and moderate accuracy, damage, and range. It can be upgraded with rifling, which improves the range, as well as a longer barrel and improved iron sights, which improve the accuracy. It can take as many as 3-4 shots to kill an NPC if they are shot in the torso, unless they are shot in the head, in the neck or in the upper chest, in which case a single shot is enough.

In both Red Dead Redemption 2 and Red Dead Online, this revolver is available from the start of the game. The player can purchase a second model from any gunsmith, or pick one up from slain NPCs.

Shown in the Wheeler, Rawson and Co. Catalogue 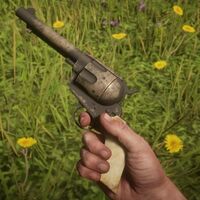 Hosea's custom models (They are nearly identical to John's model)

Cattleman Revolver in the chest holster from Angelo Bronte's mobster

Retrieved from "https://reddead.fandom.com/wiki/Cattleman_Revolver_(RDR_2)?oldid=416597"
Community content is available under CC-BY-SA unless otherwise noted.