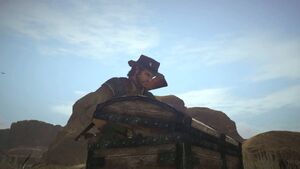 Chests can be found all over New Austin, West Elizabeth, and Nuevo Paraiso, in both the wild and in urban areas, and in nearly all Safehouses.

Generally speaking, most Bounty Hunting locations contain a chest, and chests in the wild or in small settlements tend to be found near some sort of minor landmark near a location; often near walls, trees, rock groupings, or in tents or other small man-made structures. Chests in the wild almost always contain $20–$25 and you will not become wanted for opening them. Chests in urban areas may contain consumables of larger amounts of money, and you may become wanted if you open them, depending on the location. Safehouse chests normally contain ammunition.

Several gang hideouts have chests that contain very large amounts of money ($100–$75) or even new weapons; the only way to obtain the Double-Action Revolver in Single Player is to open the chest in the house where the deputy is being held in the Tesoro Azul gang hideout, or to take it from the gang leader.

Once a chest has been opened, it cannot be opened again until around a day has passed in the game, or the player uses fast travel or saves the game before returning to the area. Upon loading a game, all chests will be reset and can be opened by the player.

So far, 136 different chests containing money have been found and listed below. However, with no official total ever released, there is no current way to tell if all have been located. An overview of chest locations is as follows:

A detailed breakdown of all the known (so far) chest locations is as follows:

Random Encounters may give the player a chance to open chests that hold $40–$90, however opening these may make the strangers hostile and begin shooting the player, depending on the type of encounter.

At least two chests appear only when a bounty hunting mission is started, at the target's location. Both Plata Grande and Mercer Station experience this, and will each spawn an additional chest containing $70–80. The chest will vanish again after the mission.

Rathskeller Fork has an unusually high number of chests for a small settlement (10 in total). Killing the 2-5 lawmen that respond to any crime in the area and then opening the chests is a good way to make around $200 in 3 to 5 minutes.

In Undead Nightmare chests are only found in settlements that require being saved from the undead. These chests contain ammo that the player can take to survivors that are running low or simply keep for himself. John will also get the U.S. Army Uniform out of a chest at the Army deserters camp at The Scratching Post during the mission "American Imperialism".

Retrieved from "https://reddead.fandom.com/wiki/Chests?oldid=388365"
Community content is available under CC-BY-SA unless otherwise noted.