Red Dead Wiki
Register
Don't have an account?
Sign In
Advertisement
in: Characters in Revolver, Characters in Showdown Mode
English

Chicken is also available as a playable character in Showdown Mode from the start of the game and does not need to be unlocked. His special ability grants him dynamite that explodes on contact.

Chicken is an officer in The Ugly Gang.

Chicken is the first mini-boss Red Harlow kills in "Ugly Streetfight". He, Udo Kang, and Bad Bob Larson come across Red's dog, and after Kang shoots it, Red proceeds to wipe out Chicken and the rest of the gang.

Chicken is good at taking cover which may prove him to be an annoying target, unlike Udo Kang who almost never covers.

Chicken is listed in Sheriff Bartlett's Journal on pages 88 - 89 under the Ugly Chris' Gang section. His pages are available from the start of the game and do not need to be unlocked. His journal entry picture includes feathers and an actual chicken. 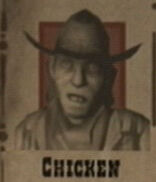 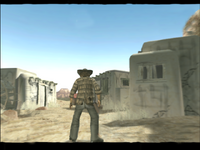