Chico Renovales is a rebelde who fights for Abraham Reyes in order to "liberate" Nuevo Paraiso from oppression. After Escalera is taken, Chico can be seen as a guard at the main gate.

He can be encountered in most missions that take place in Nuevo Paraiso. After the Rebeldes defeat the Mexican Army, Chico operates as a lawman and will pursue Marston if he commits a crime. He can most often be found playing Poker in the Chuparosa or Casa Madrugada saloons.

Chico and Victor Melendez sneak up on a Mexican soldier in the mission "Civilization, at any Price".

Chico runs towards the train after stabbing a soldier. 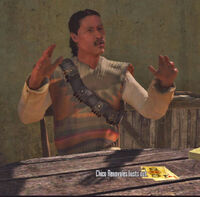