Christina is a minor character featured in Red Dead Revolver.

Christina is described as the most loved and hated person in Brimstone. She is loved by every man, even if he won't admit it in front of his wife, and hated by every woman. She works as a prostitute and showgirl in the Brimstone saloon.

Although the showgirls in the saloon look identical, apart from different colored outfits, it can be assumed that Christina is one of the two showgirls who side with Dan and Sam during the mission "Saloon Fight". The line used in that scene ("If you won't let us dance, then we'll make you dance!") is the same line used by Christina when selected in Showdown Mode. This being the case, the player should kill Christina during that mission, The ending cutscene shows the dead showgirl.

Christina is one of the characters who is available as a playable character in Showdown Mode from the start of the game. Her character does not need to be unlocked. Christina starts out with a Revolver and a Sawn-Off Shotgun and is dressed in a red showgirl outfit.

Christina is listed in Sheriff Bartlett's Journal on pages 224 - 225 under the Good People of Brimstone section. Her pages are available from the start of the game and do not need to be unlocked.

Christina as she appears in Showdown. 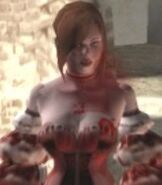 Retrieved from "https://reddead.fandom.com/wiki/Christina?oldid=387888"
Community content is available under CC-BY-SA unless otherwise noted.