Start a Wiki
watch 01:26
What is a Chupacabra?
Do you like this video?

Chupacabra (from Spanish: Goat-Sucker) is a cryptid whose origins lie in contemporary Latin American legend, and is among the mythical creatures released in the Red Dead Redemption Undead Nightmare expansion pack.

In game, the creature resembles a cross between a hyena and a boar, and demonstrates great agility. It has grey-green skin, red eyes, and a row of quills along its spine.

After completing Undead Hunter Challenges rank 4, the Chupacabra can be found:

Though the above locations have been confirmed by other players, the actual spawn location of the Chupacabra is randomly generated within the Nuevo Paraiso territory at any given time during the game. Thus, several areas may have to be repeatedly searched in order to find it.

When the Chupacabra is nearby, a blue marker will appear, along with the message: "A mythical creature has appeared in the area." The Chupacabra looks much like a dark green-furred hyena and is incredibly fast, but can be killed by the traditional shot to the head. 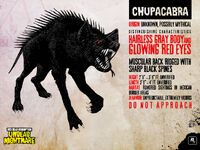 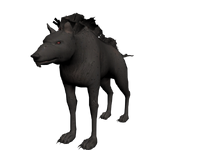 3D model of the Chupacabra. 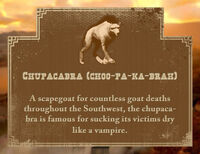 Description of the Chupacabra.

The Chupacabra, as viewed through the scope of a Sniper Rifle. 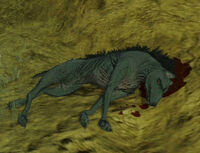 Detail of a freshly-killed {{Subst:PAGENAME}}.
Add a photo to this gallery

Hunting and killing a Chupacabra will contribute to the acquisition of the following Trophies/Achievements:

Retrieved from "https://reddead.fandom.com/wiki/Chupacabra?oldid=388370"
Community content is available under CC-BY-SA unless otherwise noted.