Chuparosa is a settlement in Red Dead Redemption in the Perdido region of the Nuevo Paraíso territory.

All of the missions in the Landon Ricketts mission strand begin in this location and two of them, "The Gunslinger's Tragedy" and "Lucky in Love", also end here. A portion of both Vincente de Santa missions "Civilization, at Any Price" and "Mexican Caesar", and the Abraham Reyes mission "The Great Mexican Train Robbery" take place in this location, and the Vincente de Santa mission "Cowards Die Many Times" ends here.

A posse of banditos often occupy a table in the saloon and they can be shot without gaining a wanted level. They will fight back however, so be careful when shooting them.

During the Undead Nightmare, this is one of 23 locations that must be cleared of the undead and then protected from re-infestation thereafter. It is home to six defenders who may be supplied with ammo, and once the town is safe they may be found milling around the saloon or patio. Clearing Chuparosa earns the player a Schofield Revolver.

In Multiplayer, this is one of seven locations that has a Land Grab game available (requires the Undead Nightmare DLC). The post to start the game is located right in front of the mayor's office.

With the addition of the Myths and Mavericks DLC a Stronghold match can be played in this location.

Moving through Chuparosa usually takes place outside the walls entirely. A tip is to use a rifle and make wide loops to make sure a pistol or shotgun equipped enemy is at a disadvantage. The wide loops also allow for sniping those on top of the buildings.

The first of the two camping spots on this map is a large balcony on the north side of the city, which is heavily exposed but allows for a wide range of view. The best cover is going partially down the stairs, preferably armed with a shotgun or pistol to fend off anyone entering back into the city or going up the stairs. The other camping area is the main building on the eastern side of town. During multiplayer team matches this building often becomes a hotspot, with the opposing teams vying for control of its strategic advantages. Although there is only one entrance to the building, a stack of crates against the northern side of the building allows for access directly to the balcony area, and also is a common way of reaching the roof, which is another camping spot itself. A Mauser Pistol often spawns on the balcony near these crates, making it a vulnerable point of entry into the building, campers using the balcony as cover should be aware of this vulnerability and watch their backs for players creeping up behind them, as defending the stairway is not enough to secure the building from attackers. From the roof of this building a third camping spot can be reached by jumping south to the adjacent building, where in multiplayer a Carcano Rifle spawns.

Chuparosa on a sunny day. 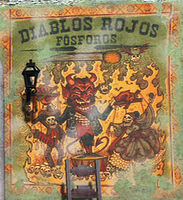 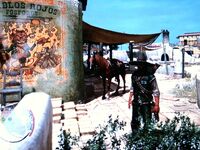 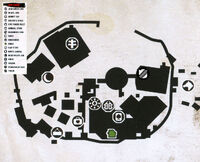 Chuparosa when zoomed in on the map

John Marston on horseback in Chuparosa