Circus Wagons is a location in Red Dead Redemption 2. It lies east of Manzanita Post.

In West Elizabeth east of Manzanita Post, a small convoy of circus wagons lays abandoned with various wooden boxes, an opened clothes chest and wooden barrel scattered around. The vehicles consist of a blue painted show wagon with a broken axle, on the sides is written 'Fitcher Brothers Travelling Circus and Minstrel Show'. Inside there is a inactive fortune telling machine named 'Madame Irene'.

Also an overturned red painted show wagon with an advertising canvas on the top side with the image of conjoined female twins (presumably a 'freak show' attraction) which reads; 'Two Beauties in one Body'.

Whatever circumstances drove the carnies to leave their equipment behind is unknown. The fact that the skeletal remains of the conjoined female twins remain behind inside the barred wagon, indicate they died possibly in an accident when it overturned and/or were simply abandoned in a hurry after an attack or similar unexpected event. 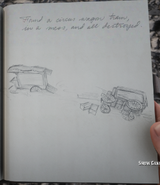 Arthur's drawing: "Found a circus wagon train, in a mess, and all destroyed." 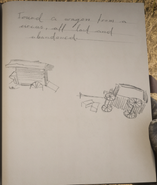 John's drawing: "Found a wagon from a circus, all lost and abandoned."