Civilization, at Any Price is the twenty-sixth mission in Red Dead Redemption.

John Marston approaches the residence of the governor only to be stopped by Vincente de Santa, a captain in the Mexican Army. He intimidates John by holding him at gunpoint but soon reveals that it's all a practical joke and invites Marston in for a drink and some food. During their conversation, De Santa keeps eying the boy who is serving him his drinks.

On the way to the train, they debate the role of government and its responsibilities to its citizens. The Captain tells John that Mexico is in a state of chaos and anarchy due to the rebellion. Upon asking about Bill Williamson and Javier Escuella, he's told that outlaws gather in the hills, under the leadership of a man called Abraham Reyes. De Santa invites Marston with them, as they attempt to capture Reyes.

After a short time, rebels will attack from both sides, riding horses and standing by the trail. They'll have to be taken out and prevented from doing too much damage to the train engine. It will need to be defended until it reaches Casa Madrugada.

On the way from Chuparosa to Casa Madrugada, Marston will encounter eight waves of enemies.

Upon reaching Casa Madrugada, Marston will meet up with Captain De Santa for the night. Soon, a cutscene will show two rebels hijacking the train. Marston is told that he has to stop the train before it crosses the bridge. There are multiple bandits on the train, shooting at John from the carts. The five rebels on the train are all in a line ranging from the engine to the caboose. After taking them all out, the player will have to get onto the train by riding close to it. (If the player is having trouble jumping on, ride all the way up to the front of the train until Marston is next to the coal cart. Once the player is riding so close that they are practically touching the train, press X or Square and John will climb over. The player will see the bridge ahead blow up, and Marston just manages to stop the train before it runs off the destroyed bridge.

Main article: Civilization, at Any Price/dialogues

"Because I'm not good enough for you?"

"You think you're better than me?"

"You come to my country -- my poor, little country -- and you think you can be friends with the president?"

"Sure, somewhere between the threatening stare and the soldiers armed to the teeth, yeah, yeah you had me."

"My name is Capitan Vincente De Santa. My country is in pain, John Marston."

"The rebels have seized the people by the throat and destroy our way of life." 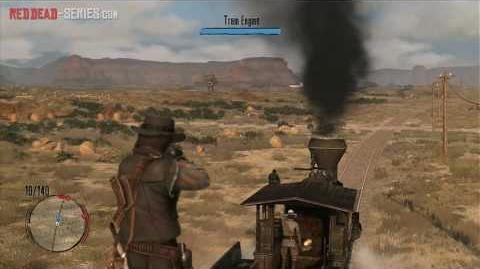 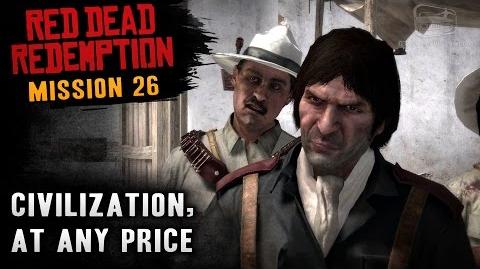 Retrieved from "https://reddead.fandom.com/wiki/Civilization,_at_Any_Price?oldid=404858"
Community content is available under CC-BY-SA unless otherwise noted.