“Them bastards in Gaptooth Breach got my friend, Floyd. Please, mister, you gotta save him!”

Clay partners with Floyd Brogles to journey to Gaptooth Breach in search of treasure in the mine. While using the miners' railway house, they are attacked and Floyd is captured and hogtied. Clay manages to escape, but is injured in the process and ultimately does not make it too far from the mine entrance and during the battle he is killed. He wears a straw boater hat and nice clothes, suggesting that he is fairly well-to-do. He can also be seen by the player sitting on the bench outside the FELIX PUBLISHING & IMMIGRATION CO., suggesting he might work there.

When Marston first enters the Gaptooth Breach gang hideout, he encounters an injured Pettiford, hiding behind two crates on the outskirts of the miner's camp. Clay explains the situation to John, and where they are holding his partner, Floyd.

Despite the fact that he appears to perish in Gaptooth Breach, Clay can still be found in Blackwater, wandering through the town. He has been known to frequent Armadillo, as well as other locations in West Elizabeth.

It appears Clay is also the announcer for the races during the missions "Liars, Cheats and Other Proud Americans" and "The Sport of Kings, and Liars". 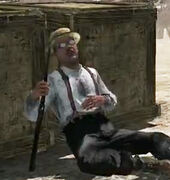 Clay Pettiford as he is found at Gaptooth Breach.

Clay announces and shoots the starting pistol for the race in "The Sport of Kings, and Liars".
Add a photo to this gallery

Retrieved from "https://reddead.fandom.com/wiki/Clay_Pettiford?oldid=387734"
Community content is available under CC-BY-SA unless otherwise noted.