For street urchin encountered in "The Joys of Civilization", see Cleet (Saint Denis).

Cleet is a supporting character featured in Red Dead Redemption 2.

Prior to 1899, Cleet became an associate of the outlaw Micah Bell, alongside Joe.

Cleet and Joe are introduced by Micah in the mission "My Last Boy", as two people that he knows who can help with the upcoming train robbery. Cleet then plays a large role in the gang's last robbery, being one of the few to jump aboard the train, and helps fight off the army with Arthur and Sadie when it begins to attack.

When Arthur goes to confront Micah after discovering that he is the traitor, Cleet sides with Dutch and Micah in the ensuing standoff. Along with all those who sided with Dutch, he aims a gun at Arthur and John, until the Pinkertons descend upon the camp, with the larger group being the first to flee. Cleet is later seen riding with Dutch, Joe and Micah, attempting to hunt down Arthur and John.

After the Van der Linde gang's dissolution following the events of the standoff, Micah forms a new gang with Cleet and Joe.

At some point in 1907, Cleet became estranged with Micah following a fallout. When Micah was involved in an assault on a family, Cleet tried to stop him from killing a little girl. Micah was furious at this and attempted to kill Cleet for his insubordination, but Cleet managed to escape him and fled to the town of Strawberry.

After hearing rumours about Cleet being in Strawberry, John Marston, Sadie Adler and Charles Smith search for him in order to find Micah. Cleet flees at the sight of John, but fails to escape as Sadie quickly subdues him. John beats Cleet and, at the advice of Sadie, ultimately decides to put him on the gallows and threaten him with death if he doesn’t talk. Cleet eventually tells the trio that Micah is hiding out at Mount Hagen and tries to convince them that he is "one of the good guys". John can choose to either hang him or spare him, although sparing Cleet will simply result in him being shot dead by Sadie instead.

Unlike Micah or Joe, Cleet seems to have some sense of moral conscience and possibly valued it above loyalty, as he was willing to stand up to Micah when he tried to kill a little girl. He seems to have a strong sense of self-preservation as well; threats of death are ultimately what causes him to reveal Micah's location, which is then followed by Cleet begging for his life.

Cleet is a small, skinny man with a "rat face" as Sadie and others call it. He also has dark brown hair in a comb-over type style over his almost bald head. 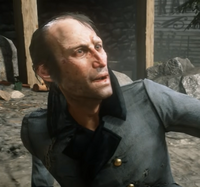 Cleet running away from John, Sadie and Charles

Before being interrogated by John

Cleet in Annesburg via the "Companion glitch"