Clyde Slade is a minor character in Red Dead Revolver.

Clyde Slade is one of only two holdovers from the days when Preston O'Leary ran the circus, before Professor Perry took over. He is the classic circus knife thrower. Rumor has it that O'Leary was about to fire him for "missing" too many assistants in the knife act.

Jack Swift will encounter Slade during the level Freak Show, where he attempts to protect his boss, Perry. Slade is a mini-boss in this level. When Jack Swift tries to untie Katie O'Grady, Slade throws a knife that hits the pole next to Jack, either trying to hit Jack or to scare him.

When he is fought, he mainly runs around, climbing on roofs and just avoiding Jack, letting the Fidgits do most of the fighting. When cornered, however, he attacks viciously with his knives, throwing them and slashing at Jack, while taunting him or laughing maniacally. The biggest threat from Slade comes due to the fact he will actively attack Katie if the player gets too far away or if they get distracted for too long by the Fidgits. Katie usually points out where he is with quotes such as "He's on the roof of the blacksmith!". When he is taken down to half health, Lightning LaRouche appears. 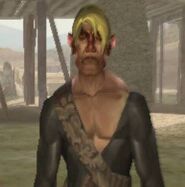 Retrieved from "https://reddead.fandom.com/wiki/Clyde_Slade?oldid=387938"
Community content is available under CC-BY-SA unless otherwise noted.