Colm O'Driscoll is a major character and a secondary antagonist featured in Red Dead Redemption 2.

Colm O'Driscoll was a long-time infamous outlaw operating across the Old West. In his earlier days, he had a loose partnership with Dutch van der Linde, a fellow infamous outlaw. The two would go on to found gangs named after them: the O'Driscoll Boys and the Van der Linde gang respectively.

Their uneasy truce eventually turned into bitter enmity when Dutch killed Colm's brother. In retaliation, Colm murdered a woman called Annabelle, who was Dutch’s lover. Ever since these events, Colm’s and Dutch's gangs were involved in a blood feud.

Over the following years, Colm would expand his operations considerably, turning his gang into one of the largest and most powerful criminal organizations in the West. He was arrested and convicted for murder twice but managed to escape on both occasions before he could be hanged.

The Van der Linde gang discover that Colm is planning a robbery of a train owned by Leviticus Cornwall. In order for them to be able to rob it instead, the gang assaults an O'Driscoll camp, to eliminate the enemy gang and steal the plans. When they arrive, Arthur and Dutch observe Colm berating one of his men, before leaving camp. As a result, Colm is absent when his men are wiped out by the Van der Linde gang, who also go on to rob the train that Colm and his gang had intended to rob.

Pearson comes to Dutch and informs him that the O'Driscoll gang is amenable to a truce and that Colm has decided to meet with Dutch to parley, but this turns out to be a ploy to capture Arthur Morgan. Colm later confronts the imprisoned Arthur, explaining that he made a deal with the Pinkertons. He articulates, saying that he is counting on Dutch to launch a rescue mission, in which the trap will be sprung and the Van der Linde gang arrested. Nevertheless, these plans are foiled when Arthur manages to escape.

In the midst of a routine coach inspection, Colm was arrested by a deputy and subsequently put on trial, during which Judge Taylor sentenced him to be hanged in Saint Denis.[1] Dutch, eager to watch him die and wanting to foil any chance of Colm escaping, personally attends Colm's execution disguised as a police officer, while bringing Arthur and Sadie Adler with him, who also disguise themselves. The three immediately spot Colm’s men, who Dutch and Arthur follow. Arthur then dispatches one O'Driscoll, Paul, who was in a sniping position on a rooftop across from the gallows, and Dutch and Sadie hold the O'Driscolls within the crowd hostage. Despite initially being cocky that his gang would save him, Colm notices Arthur in place of his sniper and his men being held hostage by Dutch and Sadie. Realizing that the rescue mission has been ruined, Colm begins panicking before he is finally hanged.

A short while after his death, the remains of the O'Driscoll gang are wiped out by Arthur and Sadie in the mission "Mrs. Sadie Adler, Widow II". Afterward, Arthur can loot the corpse of the new O'Driscoll leader, Tom, who has a letter on his person [2], which details Colm's last days in prison before his death. The letter reveals that he was "caught in the bed of a disloyal and loud-mouthed woman", which led to his capture. Colm finishes the letter by requesting that Tom kill or otherwise harm her, saying "I would hope you could pay a visit to her in order to say that all is forgiven and perhaps to give her something lasting to remember me by". This is the only way of obtaining the letter.

From the little in-game dialogue and references to him, he is said to be a very mean, cynical person who does not care about the members of his gang or really anyone else. For example, when he is speaking with Dutch about his brother that he "didn't really like him that much" and yet, still murdered Annabelle in retaliation. According to Kieran, "When he talks to you nicely, it's like the sun is shining and when he's mad at you, it's like the devil is upon you", which ferments his cynical demeanor to even his own gang. He is also shown to have glimpses of intelligence, like when he captures Arthur Morgan, knowing Dutch would come to his rescue, all as a ploy to capture Dutch and turn him in for the reward.

Colm O'Driscoll is said to prefer quantity over quality when it comes to recruitment. In contrast with Dutch who displays genuine compassion and treats fellow gang members as family, Colm treats his own men as expendable pawns and relies on fear to keep them in line.

Colm is shown as a lean, elderly man with long grey hair, weathered skin, and gritty stubble on his face. In his few appearances, he is usually seen sporting a somewhat similar outfit to Dutch, albeit in his gang's color scheme, with a black double-breasted waistcoat decorated with gold buttons and a gold watch chain. He wears black trousers, a white pinstriped shirt, a patterned green neckerchief, black finger-less gloves, and a black hat with a snakeskin band.

In an old photo of the O'Driscoll gang, he is seen wearing a long fur-lined coat, presumably saved for colder climates.

Colm among his gang 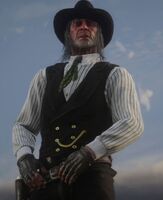 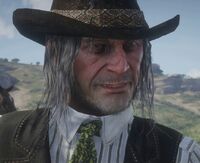 Colm in the basement of Lone Mule Stead

Colm moments before his death