View source
watch 01:34
What is a Cougar?
Do you like this video?
Play Sound

Cougars are a species of animal found in Red Dead Redemption.

Cougars are large brown cats, and one of the most fearsome predators in the game, though sometimes difficult to find. They kill both horses and players with as little as two attacks. Cougars use a 'hit and run' technique: they knock down the player, then quickly ready their next attack a safe distance away. They are aggressive, and will attack the player on sight. Furthermore, they are also extremely quiet outside of attacking, making it easy for a cougar to sneak up on a player.

While cougars sit on top of the food chain, they occasionally compete with other predators, such as grizzly bears and wolves, for food.

For more information on how to achieve this, see the relevant entry in the  Master Hunter Challenges page.

For more information on how to achieve this, see the Expert Hunter Outfit page.

Sometimes in cougar locations throughout single player, players can experience large amounts of cougars attacking very frequently. These glitches can continue indefinitely until the player leaves the area. This differs from the usual one or two cougars at one location at a time.

In another glitch, Cougars can become very popular in certain parts of the Cholla Springs area, sometimes appearing in random towns such as Armadillo, which can become annoying because cougars can easily kill you when they take you by surprise. However, this glitch is extremely rare.

Marston attempting to kill a cougar with a knife.

A cougar attacking Marston from behind. 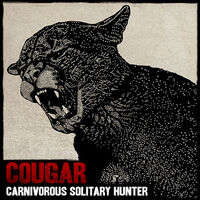 Rockstar's description of the cougar.

Marston fending off a cougar with his Hunting Knife. 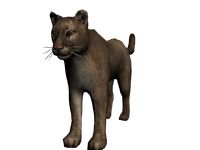 3D model of the cougar.

The player must kill a Cougar to complete the following trophy/achievement: