Before they can rob the Saint Denis bank, Dutch convinces Arthur that they must kill Angelo Bronte. They visit Thomas, a local fisherman, to procure a skiff for the assault on Bronte's mansion.

Arthur finds Hosea Matthews and Dutch arguing about murdering Bronte, with Hosea believing it will be foolish, and Dutch pointing out that Bronte controls the entire town and has set them up. Arthur and Dutch eventually leave and travel to Lagras to meet Thomas, a fisherman who will take them behind Bronte's mansion. After arriving, the duo help Thomas check crawfish traps, then they look for Jules. Arthur finds him hiding in a tree, trying to escape from a monster. As he climbs down, Arthur gets the skiff free from a large tree limb, and the four men start going back to shore. However, they get stuck, and Jules gets out to free the boat. After doing this, he is attacked by the Bullgator, and Arthur enters the water to get Jules back. He eventually does, and runs to the boat with the Bullgator chasing him. After reaching the boat, Arthur and Dutch shoot at the Bullgator to try and deter it, and start rowing back to shore. Arthur wraps up Jules' damaged leg and stops the bleeding, and Jules passes out. They eventually reach shore, and Dutch tells Arthur to meet them back there the following day. 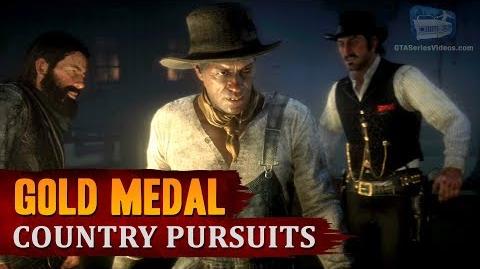