“Mr. Marston. Gracias, for your service to this land!”

–Vincente de Santa, before betraying him

Cowards Die Many Times is the thirty-sixth mission in Red Dead Redemption.

John Marston is told by Colonel Allende that Bill Williamson and Javier Escuella have been captured in Chuparosa. Together with Captain De Santa, he travels to Chuparosa, where he's betrayed by the Captain. Abraham Reyes and his men come to aid Marston, as a huge firefight breaks out between the Mexican Army and the rebels.

Ride shotgun with De Santa to Chuparosa. On the way, you can partake in a shooting contest, where you'll get $25 if you can kill five animals in a row with five bullets (4 seems to be enough, but you have to kill 5 to complete the bet). You can start this by shooting a bird, or other animal and De Santa will offer the challenge. You can do it only 3 times with a total of $75.

Upon arriving in Chuparosa, you'll enter the town and head for the church. When you enter, you'll be betrayed as one of the soldiers hit you in the head, knocking you out cold.

Just as De Santa is about to kill Marston, Reyes and his rebels will arrive and stop the execution, much like Marston stopped Reyes's execution. Once the gunfight starts, you'll have to run up a building's stairs to find Reyes, who will cut the ropes to free Marston's hands.

Next, you'll have to find your weapons. They can be found in a crate in the middle of the gunfight,[1] near the circle in the middle of the town.[2] You're heading for the building marked El Alcalde De Chuparosa, where all the soldiers are. After killing the soldiers, enter the building and shoot the guy on the stairs. Head up the same set of stairs and kill the man standing at the top of them. If there are still some enemies standing outside, you can go kill them from the terrace as well. Lastly, enter the door at the top of the stairs to kill Captain Espinoza.

In the end scene, Reyes is rallying his rebels, encouraging them to fight on to overthrow tyranny. 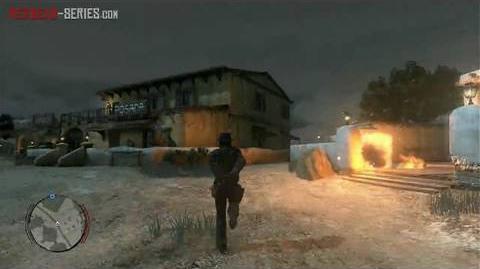 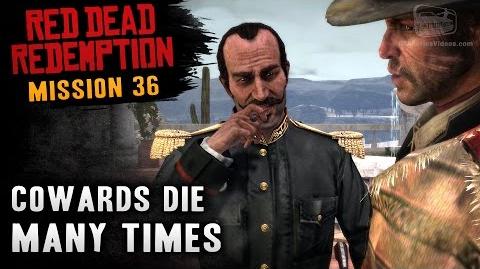 Retrieved from "https://reddead.fandom.com/wiki/Cowards_Die_Many_Times?oldid=404857"
Community content is available under CC-BY-SA unless otherwise noted.