The Cowboy outfit worn by John Marston is a long-sleeved beige shirt with the sleeves rolled up, a dark grey/faded blue denim jacket with the sleeves cut off to the shoulders, black gloves, a satchel that lays on his right side, and pin-striped pants that are worn over the boots.

It is the only outfit available to Marston at the beginning of Redemption. It is replaced by the Rancher Outfit following the mission "The Outlaw's Return".

It is the only outfit to receive significant re-design following the final storyline mission; when playing as Jack Marston during the game's epilogue, the outfit changes to a beige jacket worn over a plain white shirt with a red neckerchief around Jack's neck, and tighter, darker pants tucked into the boots.

As with most standard outfits, the Cowboy Outfit doesn't give Marston any in-game bonuses or benefits when worn.

In Redemption 2 Marston's main outfit is a very similar outfit under the name "The Cowboy". This version of the outfit is unlocked after the mission Motherhood in the first Epilogue of the game, the denim vest here however sports a very noticeable faded blue colour to the point it's almost completely greyed out. 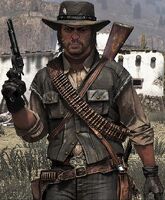 John's version is automatically unlocked at the beginning of the game, following the mission "Exodus in America".

Jack's version unlocked following the completion of the mission "The Last Enemy That Shall Be Destroyed".

The Cowboy Outfit is automatically unlocked following the completion of the mission "Love in the Time of Plague".

This rendition of the Cowboy Outfit can be unlocked following the mission "Motherhood", and like all modular outfits in the game, it can be customized with other articles of clothing.

The Cowboy Outfit is called "The Clelland Outfit" in RDO. It was originally unlocked by reaching the max rank after purchasing the Outlaw Pass 2 for 25 gold bars. It can later be purchased from Madam Nazar for 52 gold bars. 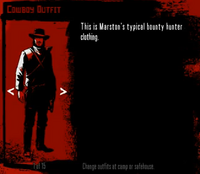 Artwork of John in his Cowboy Outfit.

Promotional screenshot depicting John in his Cowboy Outfit, sans the vest and the hat.

John wearing his Cowboy outfit, with the exception of his sleeveless denim vest, as seen in "New Friends, Old Problems".

Promotional screenshot of John wearing his Cowboy Outfit; notice the lack of his signature hat.

John wearing a beta version of the Cowboy Outfit in a pre-release screenshot.